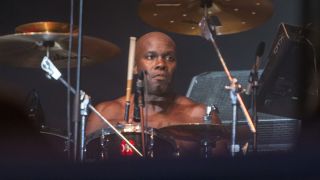 The drumming world was stunned as 2015 came to an end and news broke that The Specials drummer John Bradbury had passed away.

Libertines man Powell had been involved in the 2014 Return of the Rudeboy exhibition which paid tribute the culture that The Specials helped reinvigorate in the late '70s.

"I contributed a bunch of music for that exhibition and I took part in the gallery showing," he explains. "At the grand opening in London John Bradbury came down and we had a good old-fashioned hangover. It was very cool. Fast forward to hearing he had passed away, that was a massive shock. The Specials were childhood heroes of mine."

With the band determined to carry on another shock was on the way for Powell.

"My DJ agent also kind of represents [Specials singer] Terry Hall and he hit me up. He sent me this message asking if I wanted to play with The Specials. What was I supposed to say other than, 'Hell yeah'?"

Today, as we speak to Gary he is preparing for The Specials heading out on a September US tour before UK dates in October and November.

"I made sure the material was nailed as much as I could," he says of getting to grips with the set list. "I spent a lot of time re-acclimatising myself with the back catalogue. But then I realised I had learned the lyrics more than the grooves! I could sing them all but I needed to sit back down and learn the beats. I would listen to the songs while I was washing up, while I was catching up on emails, while I was in the car, all the time."

Powell, who will be using his tried-and-trusted Yamaha/Zildjian Libertines rig for the shows, admits that while the band are keen for him to put his own imprint on the songs, he is mindful of staying true to Brad's original parts.

"I didn't want to throw a curveball to anybody. I'm the new kid and they're not used to my playing. If I do something different it might freak people out and I don't want to do that because then I'll get fired. I don't want to get fired because that would be really embarrassing, if I got fired I'd have to jump in the Thames or something [laughs]."

The ever-enthusiastic sticksman also reveals that there were times that the challenge of taking on the gig seemed daunting. However, on such occasions there was one thought than instantly snapped him out of his stupor.

"I got lost in myself sometimes and you need to remind yourself why you're there. I would sometimes think, 'I can't do this.' But then you think that you're doing this because Brad has died. You realise this is not about me, it is about me trying to do justice to Brad and the music of The Specials."

He laughs. "They may think that I'm an ass and they don't want to spend any more time with me than they have to [laughs]! Fingers crossed they won't think that."