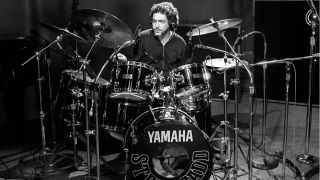 Every instrument has its ambassadors who unite, transcending tastes and genres to universal applause. For drummers, Steve Gadd is certainly one such player.

Combining what is considered to be one of the ultimate senses of timing and feel with an orthodox military technique, and not only incorporating - but applying and taking ownership - of world rhythms in popular music.

Steve Gadd isn't the 'lucky guy who got the gig', he's the guy who is sought after, making artists and songwriters feel fortunate to have secured him. From Steely Dan to Clapton and beyond, Gadd is the ultimate session drummer.

So, if you're yet to delve into the grooves and fills that make Steve Gadd so universally loved, or maybe you just need reminding, sit back and check out five songs that not only define the legendary sticksman's career, but that are also defined by his playing.

Surely the most iconic beat in Steve's considerable back catalogue of licks. The military-style snare complements the track's delicate guitar line perfectly. The main snare beat is beautifully punctuated by the on-the-money hi-hat work, including that tricky left-foot stepped note.

Check out the live video below to see exactly why this is regarded as such a drum classic.

If 50 Ways… has a funkier brother, it’s Gadd’s beat from Chick Corea’s Lenore. This delicious slice of syncopation relies on an inverted paradiddle played between the closed hi-hat, snare, kick and floor tom.

As with so many Gadd moments, the genius doesn’t lie in complexity, rather, applying simple concepts in original ways. Lenore is pacy and off-beat enough to create interest, but still ’normal’ enough to nod your head to.

An eight-minute epic filled with hand/foot triplets, a classic Gadd feel and a sublime solo derived from ratamacues. Steve told Rhythm magazine in 2010 that his drum track for 'Aja' was in the bag after just two takes.

Take a listen to the 1979 original below to fully understand just what an impressive feat that is.

'Aja' wasn't the only iconic drum track Steve laid down in 1979. He also got behind the kit for jazz pop breakthrough artist Rickie Lee Jones on her hit single 'Chuck E's In Love'.

Steve locks into the song's laidback groove throughout, but it's the mid-track breakdown that sets 'Chuck E's In Love' apart from the rest. Inverted double-strokes played as linear sixteenth-notes between the hands and feet are the secret to this addictive flourish.

Paul Simon - 'Late In The Evening'

Paul Simon's Late In The Evening sees Steve further his reputation as a drummer not afraid of trying something beyond the norm as he beats out a Mozambique pattern with two sticks in each hand, moving between the toms and floor tom rim to create yet another unmistakable Gadd lick and an absolutely irresistible beat.

The sticking is simple, but getting the right and left foot ostinato to lock in isn't so easy.

Who gives you extra? Steve Gadd, that's who. While this isn't a song, it is testament to the fact that even during a global health crisis, Steve Gadd can still bring it better than the rest.

A couple of weeks before his 75th birthday, Dr. G wowed the world once more by ripping with brushes on a cardboard box. If he was a master 50 years ago, we'd say Steve is pretty much the oracle today.