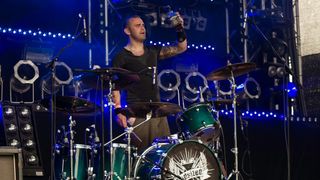 This week I wanted to look at the psychological aspects of touring, being around others in close proximity and how to make the best of it. How you pass the time, get your rest and meet the physical and mental challenges of being on the road is crucial to whether you'll survive out there, and whether people will want to be around you for the long haul. Having someone vouch for you as a tourer can be the difference between getting the gig or not.

Some people read, watch movies or just shoot the breeze, whatever gets you through the ride. It's quite important to use this opportunity as best you can to relax, this could be your only chance that day. Also respect that's the same for others, and let them do their thing.

I've been on some truly horrible tours because of low morale. It's usually poor communication, having built up from something very small. I've seen it trickle into the performance and people quit bands because they can take no more. It's amazing how far away from playing music a lot of this is, but if you don't take care of it, it'll take care of you. I guess the best way I can put it is it can be like moving into a tiny uncomfortable apartment with sometimes up to nine guys, where you all also work together for very little money. There's not much escape, so you'd better learn to get along! It'll soon bite you if you don't.

So firstly, lead by example. Commit to not letting anything get you down, roll with the punches and laugh at how accurately you and your buddies are turning into Spinal Tap more each day. No matter how bad it seems, some other band has been through it (trust me!), and now laughs about it.

Don't complain, it helps no one. By all means after the tour, learn to route better, adjust how many T-hirts you order, but don't stress the driver out further by stating obvious facts. Also, if you had the plans handed to you by another member who took time to organise things, think twice before bringing them down - they know already.

When it's time to load in, don't put your back out, but get stuck in. Everyone can tell who's not pulling their weight and it'll be frowned upon quickly, don't just take care of your own gear. Also, don't leave one guy to do the merch. In one band, the same guy used to always set up, he just did it. One day I grabbed two beers and offered to help and he really appreciated it. He didn't want the job, but understood it had to be done. That crappy one-man task soon became a bunch of us having a beer and a laugh after a drive and load-in.

Dumb questions. "Where's the rider?" I don't know, I just walked into the venue like you did. Musicians have an incredible ability to stop acting like normal, capable human beings on the road. If you want the rider, promoter, dressing room etc, go and sort it out. You probably have all the information anyone else has, use it and your initiative.

Like so much, touring is what you make of it. You have to remember that your actions will almost certainly have an effect on everyone around you - your bad mood can bring the whole party down. Or your unflappable resilience can serve your band like a mad captain of rock'n'roll. There will be tough times, I've toured with guys who have just had a baby, people who have been told they have no job to come back to, people going through break-ups and house moves while they're on the road. One drummer was fired whilst on the road for messing up an intro, and kicked out of the headline act's dressing room. He was expected to finish that tour and stay out of everyone's way. He was 2,000 miles from home and looked like he didn't have a friend in the world. It was brutal, but we took him in, shared our beers and food and made him know he had pals, which meant a lot to him.

My own personal worst experience was one tour where mentally and physically I was in bad shape. In preparation for recording [Jamie Lenman album] Muscle Memory I was drumming eight hours a day, leading up to three days in the studio recording around 25 tracks, most of them tough. All this led to a fracture in my left wrist. I had to go on the road with Godsized literally the day after tracking. On top of all this I was going through an extremely tough break up, it was a bad time.

About 30 seconds into the first show I hit the snare and thought I'd broken my wrist, I didn't really have anything to come home to and remember looking out into the crowd and genuinely not wanting to be there. I somehow battled through that set (no encore that night!) but the aftermath was dark. The guys rallied around me, made it clear that whatever needed to happen was cool, even if it meant canceling what were important shows. Determined not to let them down I drank a lot of whiskey, used ice between songs and took painkillers and somehow finished that tour. Looking back I can't believe what I went through, but it's now one of my proudest achievements.

It will be a test of friendships, but an opportunity to make memories that will last a lifetime. Look out for your buddies, it's amazing how letting someone talk about their kid or girlfriend for five minutes makes it a little easier for them being away from them. Some people get homesick, some never want to come home and chances are in every group of people you'll get a mix of both. People can't help how they feel, but you can help them have a good time, and make their trip a little better, like a good friend should.

You aren't responsible for everyone's happiness, but positivity and a sense of humour can spread quickly through any team, and make your band more awesome to be in and your tour one to remember.