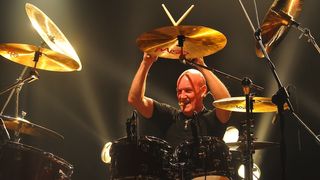 Former AC/DC drummer Chris Slade has paid tribute to Malcolm Young, describing the Aussie axeman as the greatest rhythm guitarist that the world has ever seen.

In reaction to news that Malcolm is taking a break from AC/DC due to ill health, Slade told Rhythm: "It's terrible to hear about Malcolm, that is a terrible shock. I knew he was ill, he has been ill for a long time but I think it has come to a head by the sounds of things. That is terrible."

The drummer, who was at the kit for AC/DC's Razors Edge album, went on to pay tribute to AC/DC founder's guitar skills.

"He must be, and I've spoken to other guitarists about this, he must be the greatest rhythm guitarist ever born," he said. "Even Angus says that Malcolm is a better guitarist than he is. He makes the drummer's job so easy, he's a metronome."