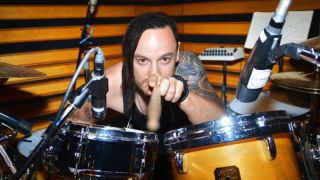 Australian drummer Chris Reeve recently bagged the gig with US rockers Filter. But this was far from any run of the mill audition process.

Reeve was still living in Perth when he got the call that the gig was up for grabs, making his audition process all the more demanding, as he had to impress his future band mates from 9,000 miles away.

Here, he shares some of the secrets that helped him bag his big gig.

Prepare for the unexpected

My audition process was a little out of the norm being that I was on the opposite side of the world. But it's done this way for a musician that doesn't live somewhere like Los Angeles. It all started from recommendations and endorsements from common connections. Eventually, Richard emailed me directly to ask if I was, "ready to start my career in the U.S" and if so, to send some videos of my playing. Once he'd seen my stuff and spoken with me a few times, he was happy to help me get my Visa approved and have me fly out for the tour starting in two months.

I pretty much put my life on hold for a week just for the audition. They didn't ask for anything in particular, but I thought to myself, 'I should play one of their songs, note for note - to show them exactly what they'd be getting and that I can learn fast.' So I took the time to go through Filter's catalogue and chose a song that contained both intricate parts, and groovy parts to accentuate all areas of my playing. I chose You Walk Away.

I also wanted to present myself in the most professional way possible. So, instead of just filming myself playing something on an iPhone and sending it straight off, I rented a professional studio and hired an engineer to get some quality audio. I then shot the whole session on a GoPro and used my editing knowledge to cut the video (which you can see below) into a pro looking clip.

Once they'd seen it, they were pretty excited to have me on board. So, I learned the entire catalogue and kept sending audio and video snippets of other songs to keep them excited during my nail-biting visa process.

Be over prepared. The act needs to feel that they can trust you to get the job done. Instead of just learning what they ask of you, go above and beyond to learn as much of the catalogue as possible. If they keep throwing tunes at you and you keep nailing them to the best of your ability, it gets them excited- shows that you're professional, and assures them that you can handle the pressure.

Being friendly and easy to get along with goes a long way as well. You might end up touring with them nine months out of the year, so it's good to show them that you're great company.

Use the right gear

I think it's pretty important to arrive at an audition with the right gear. The songs and the artist's image can tell you a lot about what they're looking for. If you're auditioning for an acoustic singer/songwriter, arriving with a 20 piece drum kit on a rack might seem egotistical. Alternatively, if you're auditioning for a band that has a lot of double bass drum parts- find out if you need to provide your own double pedal.

Though this point can be modified after the audition, image can be a big factor as well. If the act is hard rock, get out your black clothes and studs. If they're straight up bluegrass - maybe some cool boots. Do some research and find out what the band looks like, then dress the part. If you seem like you already fit in with their family, it could be the deciding factor between you and someone with similar abilities.

Check your ego at the door

A general rule is don't arrive with a bad attitude! But on a broader scale, I'd say don't let yourself be intimidated by the situation. Everyone in the room will be feeling a little awkward or nervous in one way or another, so try to imagine that right now- you are all equals. Just be yourself and perform to the best of your ability.

I was once told that there are three main areas people look at when hiring for a job: ability, reliability, and likability. If you can excel in two of these you will find success.

It really makes sense when you think about it! If you're really nice and super reliable - maybe you'll get the gig over the much better player because they had an inflated ego. Or maybe you're a virtuoso and have a beautiful personality, but you're consistently late.

That could possibly be overlooked because of your special ability (although it could also be a dealbreaker). In rare instances, there could be acts who are looking for the greatest and most reliable players in the world that might overlook a bad attitude.

Some of the most amazing musicians are complete jerks (a heartbreak to discover). Ideally, you'd want to have all three points covered evenly. But the bottom line is, if you can be yourself and balance those three points to the best of your ability you've given yourself the best chance of landing the gig.