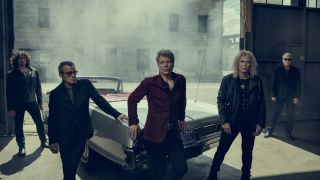 "We put this record together in the studio," says Bon Jovi's Tico Torres. "We tried to do it as live as possible."

In a day and age in which bands can record remotely and paste an album together without ever stepping into the same room, it is refreshing to hear that for their 13th studio album, This House Is Not For Sale, Bon Jovi preferred to jam it out in the live room.

"It's grabbing the embryo and cultivating it into a song, we like to work like that," Tico says of the band's approach to recording. "It's a lot better that way, emotionally it feels better. Also there's an immediate response if you're recording live as a band.

This time around, however, there were one or two changes for Tico to get to grips with. The obvious elephant in the room was the departure for the band's talismanic guitarist Richie Sambora, who was replaced by Phil 'X' Xenidis.

"In a sense it was different because we had a different element. Phil brought a new dimension to the music for us. That opened up the realms of experiments. You push to your limits and see what you can come up with."

The record also saw Tico use his DW studio kit. He moved to the California company in 2013 after an association with Pearl that spanned several decades.

"It was pretty much the same as my live set up. I might change my Paiste cymbals and of course snare drums for different songs. I would also use different tunings, That's fun to experiment with the tunings if the song needs something different, changing the tuning can give it a different blend to the music."

One approach that Tico clearly favoured was tinkering with the tom tunings of his DW.

"I did a lot of tom work on this record and I was able to tonally get the kit close to the key of the song. There's a song called New Year's Day where I start off a little off rhythm and then bring it back to some kind of semblance of order, it's a cool rhythm that works for the song."

Tico is also adamant that despite Bon Jovi now being 30-plus years in, their chemistry is very much still alive and that helps bring about some special moments on the record.

"We have a couple of slow songs that are just all about feel, those songs are all about the magic of the musicians. That's when you get it done in one take. Wanted Dead Or Alive was like that back when we did that. It was just one take and it was magic and we have a couple of those on this record.