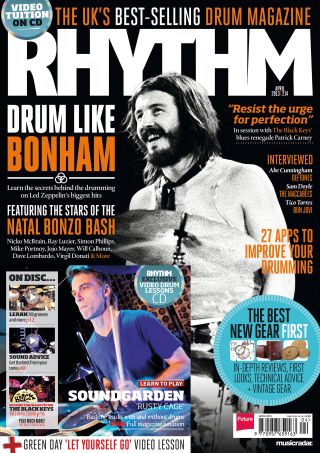 At this year's NAMM show the great and good from the drum world gathered to pay tribute to bona fide drum icon John Bonham at the 2013 Bonzo Bash. Organised by former Whitesnake man Brian Tichy the event saw the likes of Nicko McBrain, Mike Portnoy, Ray Luzier, Simon Phillips, Dave Lombardo, Virgil Donati, Jojo Mayer, Will Calhoun and many more get behind the kit and play their favourite Bonzo track. We were there to film the whole thing and present to you the ultimate Bonham drum lesson as we talk to said drum stars about why they love Bonham, how they approached playing their chosen Led Zep track and tips on how to play like Bonzo. Plus, we have video performances from a host of the night's stars.

PLUS: The hottest gear from NAMM 2013

ALSO: The essential guide to apps for drummers - Our pick of the apps that can help you behind the kit

Find out how to play Soundgarden's grunge classic 'Rusty Cage', nail Black Keys' blues rocker 'Gold on the Ceiling' and get to grips with Green Day's 'Let Yourself Go'.

Plus enjoy all of your favourite lessons from Jason Bowld, Gareth Dylan Smith, Colin Woolway and more

A set of Ahead percussion cases

All this and more in the April issue of Rhythm available now from all good newsagents, online or digitally at the Google Play Store or from Apple Newsstand. Get yourself a copy from Apple Newsstand and enjoy all of our tuition content plus bonus videos, image galleries and other content.