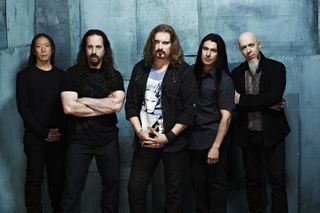 DRUM EXPO 2014: Dream Theater's Mike Mangini has never been one to rest on his vast achievements. Having set five World's Fastest Drummer records in his time, Mike has inspired many players through the decades. Previously drummer for bands like Extreme and Annihilator, and artists such as Steve Vai, as well as serving on the faculty of Berklee College of Music, Mike has long surrounded himself with pro musicians to further expand his impressive playing.

Throughout this tech-focused interview, Mike explains his unique approach to building speed and stamina, how to work with dynamics, explore performance skills, and how he writes his celebrated beats.

"Feel and dynamics are part of the ingredients that make up how the resulting drum part make you and other people feel. Dynamics change everything. When you think about linear playing, for example - a lot of notes in a line - if there are ghost notes on the snare drum but you play all of them at the same volume, well, that's what makes a drum machine sound so bad. It's not the timing of the drum machine that makes it sound unpleasant and robotic to most of us, it's the dynamics that give it the awful sound.

"Using my eye, I memorise different zones to give me dynamics:

Zone 1 - one-two inches above the snare

Zone 2 - five inches above the snare

"I do it live on the Dream Theater track Breaking All Illusions. The middle section was recorded quietly, but when I play it live I stare at my stick tip and go for about four inches off the drum. If I played it like I did in the studio it would be at a different height, but live it needs to be above four inches to break the seal of the [noise] gate."

"First, I recognise it for what it is because that helps me understand it and how to gain it. It's a simple derivative. It's neither musical nor artistic - it's a mathematical term. It's a change of time and distance. Since we're dealing with the human body as the main obstacle in gaining speed, my approach to gaining speed is to see it as recognising the feeling of smaller groupings of notes played more quickly versus the feeling of larger groupings of notes played more slowly. There's a difference of the feeling between these two worlds because the heights are different - the body requires certain muscles to move at those heights.

"Our natural instincts go to the smaller muscle groups for the smaller heights. This is incorrect - we have to fight human nature and do what nature tells us. When the bigger muscle groups are flexed, it's easier for the smaller ones to do what they're made to. So I approach gaining speed by seeing the beater distance or stick tip heights. When I practise at different heights, at different dynamic levels, I pay attention to what it feels like. I combine slowly played notes with smaller groupings of four or five fast notes. Play single stroke five and nine stroke rolls, at a sixteenth note rate, in the middle of playing a longer string of eighth notes. In a bar of 4/4, only put one five or nine stroke roll played at sixteenth notes out of all four beats in the 4/4 bar, then speed that up as much as you can to learn the feeling of what it means to play faster for a small grouping."

"Visualise the old story of the Greek Zeno, where calculus supposedly comes from. This guy Zeno fired an arrow over a pretty good distance and wondered where in time the arrow was at each point. Calculus comes from dividing up the space into slices over time. Let's say I move from left to right on my drum kit. When I practise moving left to right, I see it in slices. So when I practice slowly it's not that I'm just looking at where I am at every point in time, I'm using my eyes to look slightly ahead because once a stick tip is positioned on a drum or a cymbal, you're done!

"Why sit there and stare at it? I move my eyeball because that way I don't have to wait for my head and neck to move, or for my shoulders or trunk to move. Accuracy means slowing down time, using your eyes and paying attention. I use my eyeballs to look ahead and mentally I talk to myself about what I'm feeling. For example, when I'm moving from left to right to left I'm thinking about the balance shift in the balls of my feet and my rear end on the stool. As I look ahead I'm thinking about what I'm feeling. This helps me record what I'm doing and makes for meaningful practice."

Mike uses this technique all of the time but he suggested checking out the non-metronomic Dream Theater song Illumination Theory, which contains the tempo fluctuations he practiced using his eyes to break it down.

"People see before they hear - the speed of light is faster than the speed of sound. What people see is perceived first so it's very important. My take on this is different from other people. For example, the way I play the drums requires a tremendous amount of balance shifting to be in control.

"When I'm in a situation like a rock cover band or I'm not playing as many notes, there's physically more room for showmanship with the sticks and there's literally more time because there's less notes played. [Showmanship] is important but you have to put the music, and how many notes and how much space you have, first. If there's more space, I can spin sticks for longer. With Dream Theater, my parts are constructed as such that sometimes I'm playing two rhythms at once - my hands are busy!"

"I construct drum parts based on tone. That's why I have as many drums and cymbals as I do. The highest note in the riff? Well that's pretty much the snare drum hits for me. When the riff lands on the most prominent low note, that's where I hit the bass drum. That's pretty much for all the instruments: keyboard, guitar and bass. Whether the snare drum or bass drum lands on or off the beat depends on the riff. If the riff starts with a higher note, my snare starts on the beat. If it starts with a lower note, my bass drum is on the beat so it starts there.

"I have stack cymbals, ride cymbals and hi-hats in pitch ranges from high to low. I choose my ride source based on where the other instruments will start - are they playing in the higher register or the lower register? My drum fills are also like that. Either the drum fill is just within the context of the drums and only a drum fill, or it's a transition fill."