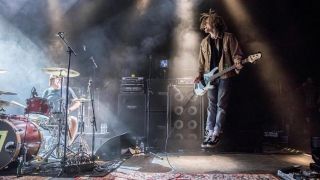 Brit-rockers A returned recently with a whistle-stop tour of the UK’s premiere rock clubs (a jaunt headed up by Hell Is For Heroes), but they faced one problem.

With bass player and Radio 1 DJ Dan Carter otherwise engaged, the band was short of someone to handle the low-end. Who could they draft in to fill the void? Few would have expected that their pick would have been McFly’s Dougie Poynter.

It may have raised eyebrows amongst fans, but given the rave reviews that the band received throughout the run, it proved to be an inspired choice. Poynter, of course, has history with the band, particularly frontman Jason Perry, who helmed the production desk for McFly’s last three albums.

We caught up with new boy Poynter and A drummer Adam Perry during the latest batch of dates, and got the inside word on rhythm sections, gear tips from Mark Hoppus and the age-old problem of where to find the finest supermarket mince pies.

What kind of preparation have you put in ahead of these shows - particularly given that you’re operating as a brand new rhythm section?

“Then we had one rehearsal after Christmas which was quite serious for an hour, and then we had one for half-an-hour where I had to leave before the end to pick my kids up from ballet.”

Dougie: “I live in Richmond right by the park, so I run around there and I had the A setlist in my in-ears and learned them while running around the park. I knew all of the songs- I grew up listening to these guys. I first met them in 2006. Jason Perry started producing McFly and we’ve been friends ever since. When I got asked to do this I was like, ‘Fuck yeah!’”

How important was knowing each other in being able to go on tour after just a couple of hours of rehearsal?

Dougie: “We’ve known each other for a long time, so it hasn’t felt weird at all. We’re all already friends. The weird thing about joining a new band is not knowing each other, so we got over that right away. Playing wise, it has been fine.”

Adam: “We were blown away that Dougie knew the songs. Now we’re old and we’ve got zero memory. The songs aren’t super-complicated but on a song like Nothing, there’s a lot going on in the verse.”

Dougie: “It’s the structures. They are the hardest things to remember. You’ve got to learn those, and it doesn’t matter how much you practise; you’ve then got to go do it in front of a bunch of people with all of these distractions, and sometimes things going wrong and it not sounding great on stage.”

Dougie, how much of a transition has it been for you, moving from the McFly rhythm section with Harry to playing with Adam?

Adam: “It’s similar to when I joined Bloodhound Gang. We were all friends. We had toured with them for three years. Instead of just hanging out we were in a band together now. There’s nothing going on with Bloodhound Gang at the moment. We were deported from Russia on the last tour and we’ve still got another year to serve on that, so that has stopped everything, I think.”

Adam: “You get some bands that hate each other, like Sting hates Stewart Copeland. You can’t imagine that.”

Dougie: “I’m always watching the drummer and knowing from their face what they’re going to do next. I’ve known Adam for so long that I know what he’s going to do.”

Adam: “You get to know each other and know all of the little nuances. There are bits of Dougie’s playing that I’ve picked up on since the first show and it sounds amazing now.”

What has been the biggest challenge for you playing these shows, Dougie?

Dougie: “Joining a band that has already been going for a while and replacing someone, I’m learning all of Dan Carter’s basslines. That is the best lesson that you can get.

“I’m starting a new band [INK, formed with guitarist Todd Dorigo and drummer Corey Alexander], which will be launching in April and I’ve already taken some stuff from Dan Carter’s basslines into my new band. Dan wasn’t your traditional pop-punk kind of player. I’ve put my own mark on the sound; I’m using my guitars so it has clanky sound and all of the mids are up. I love a clank.”

Dougie: “I brought my entire rig with me, but there’s not enough room on stage. It’s all Ashdown cabs running through Kempers. The last time I used it was at the O2. I’ve got all of Mark Hoppus’s live stuff and one of his studio sounds in the Kemper. But it’s this huge flightcase that I can’t get on stage. So I’m using the [opening act] Vex Red gear, which is actually The 1975’s rig.

“I use a Music Man Sterling but I take the pickups out and put in Seymour Duncan’s and flip them around the other way so all of your high notes are just as bassy as your low ones. That’s something I learned from Hoppus. It never gets twangy or banjo-y.”

Adam: “My drums are in Munich where all of our stuff got sent back to when [Bloodhound Gang] got kicked out of Russia. I haven’t seen my kit for four years! For this tour, I realised I’d have to pick up all of my stuff from Munich which would require… effort. So we asked Harry [Judd] if we could use one of his McFly kits. He said he had seven kits and I could borrow one.”

Dougie: “Harry said we could borrow a kit from the McFly gear storage and we just picked the one nearest the door. Harry saw it and realised it was his favourite kit!”

Adam: “It sounds good, though! It’s a Gretsch but I couldn’t tell you any more than that.”

Has everything ran smoothly on stage, so far?

Adam: “We’re playing an old song called No 1 on this tour. The last time we played it I put my left hand in the air while I was drumming and it got stuck there. That’s what happens when you get older. I had to put my stick down and pull my left hand down with my right.”

Dougie: “That’s how it all comes back to chemistry, because if I didn’t know you and saw you doing that I’d think, ‘What the fuck’s going on?!’

Adam: “Most of the mistakes have been hidden. I notice them but no-one else.”

Dougie: “There was a point the other night where I stopped playing. A jack lead came out and no-one even noticed. No-one noticed that the bass had dropped out! That’s why the bass is the best instrument to play!”

Could there be further A activity beyond these shows?

Adam: “I’d love to. Every time we’re all together we want to do more. We piss people off because we’re all so busy.”

Dougie: “I’d love to do this again. This has been one of the most fun tours that I’ve ever had.”