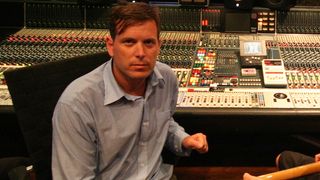 Jason Perry at the mixing desk

As frontman for Brit cheeky chappy rockers A, Jason Perry poured blood, sweat and tears into the cause, wrangling with major labels and getting up to his eyeballs in debt before eventually hitting paydirt with a smash album Hi-fi Serious in 2002.

Since then, he has written for chart-topping popsters (Mcfly, Matt Willis and more), produced the future of Brit rock (Don Broco, The Blackout, Kids In Glass Houses) and even ventured into management. And he's also back fronting A as the band headline the fourth stage at Download Festival on 12 June.

As a man with so many fingers in such an array of musical pies, he seemed to be the perfect person to ask how you can make it as a musician.

1. Make it happen yourself

"Everyone slags major record companies off, but I really liked our label. It was great being signed to a major, but it's a nightmare when it's not going well for you. We never went to our record label, we'd go to our management office, come up with ideas and go off and do them.

"Three videos for £10,000 and two of them were A listed on German TV, they were bigger than Madonna. I was in a shopping centre in Berlin and they had massive screens and we were on all of them with this video we made for £2,500!"

"We did demos for Starbucks and Going Down. The label thought they were alright but rather than let us do the whole album they let us just do two songs. They ended up giving us budget for the album but even then I was getting night buses at 5AM after 20 hours at the studio because they wouldn't pay for cabs. We were on a major label but they wouldn't give us any money.

"We were skint and all £20,000 down on credit cards. We were signed to Warners and they didn't care. We made the album and within two weeks of them hearing Nothing it all changed. The point is, when you're not priority at a major it's frustrating and you have to make it happen for yourself, but when you're at a major and they press the button, the big red button up in an office that you never see, it's unbelievable and you're suddenly on a private jet doing promo tours and arenas."

3. Don't lose sight of who you are

"The last album we did was a big rock album with Terry Date. We lost sight of what A was. We were trying to become bigger, we'd done that with Nothing but without compromising, it wasn't some old man, Nickelback, lumpy rock.

"On the last album we spent two months in a posh studio and all we cared about was getting loads of bottom end on the record. No one cares about that. Knowing what you are is what's important when you're making a record. I was proud of how that record sounded, but there's no personality on it.

"When I did The Blackout album, it captured their personality. The album is like being in the practice room with them, it's captured the essence of them. I did the last Kids In Glass Houses record as well and that was completely live, just raw. If you make a mistake just stop and do it again. It's all about getting that spirit."

4. Remember, it's all about the songs

"It's almost impossible to make a good song sound bad. A lot of producers think it's about mic placement on a snare drum, but honestly, it's amazing how good the snare sounds when the song's good. When the song's bad all you can hear is the snare!

"I get bands writing to me every day asking how they can make it. You have to believe in life that good will out. Music isn't meant to be fair, it's not a sport. Your guitarist might be amazing, it helps, but who's to say what'll happen. Of you have a little bit of magic hopefully someone will hear it. You need great songs."

"I did a TV programme once before we had a record deal. John Entwistle was on it and said, 'If you're trying to get a record deal, you don't deserve it.' I was absolutely livid! But I woke up the next morning and realised he was right. Do you think Paul Weller went round asking people for a record deal?! We scrapped everything the next day and started again. We then had nine record deals offered to us in four months."

6. Get out and meet people

"We had an agent, you'd think they'd get you all these tours. All we wanted to do was tour with Ash, who were huge, our agent said Ash were playing in London and we should go have a few beers with them. That's how you get the Ash tour, you get tours by being friendly and being nice guys and not asking constantly. In music you get punishers who will email you every day. If you're doing that you're doing something wrong."

7. Think outside the box (and the UK)

"Lake Tahoe was [a hit] in Germany and that helped us. That helped keep us our record deal in the UK. Bands need to forget sometimes about England. Go have a hit in France, Germany or Austria and work your way back to England. A lot of bands go to the same radio gatekeepers for two weeks, they all say no so the band splits up! A hit is a hit, a Euro is a Euro, you can have a hit anywhere. Go have some great gigs in Timbuktu or wherever.

"I remember being in tears when we didn't get C listed in the UK for Lake Tahoe. We all thought it was a big hit and it didn't even get on the C list. We thought our life was over then because we were on a major and that's all they care about. We thought we'd get dropped, but we went out and made it happen. It sounds easy in hindsight but it wasn't!"

"The label said. 'You've got a gig in Plymouth that you have to cancel so you can do Top of the Pops.' We said, 'No way, we've built our career as a live band.' They said we'd have to cancel Top of the Pops, but we couldn't do that. Instead we did Top of the Pops then got in a helicopter straight to the venue and ran straight on stage. I sat on the tour bus afterwards and thought, 'That was it, that was the moment.' Then you realise that has just cost you £20,000!"