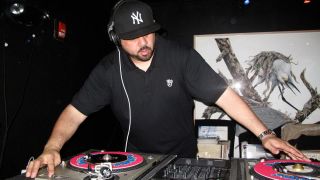 DJ EXPO 2014: From Sunset Park, Brooklyn, Kenny 'Dope' Gonzalez is a four-time Grammy nominated producer and DJ, one half of the innovative house-garage duo Masters at Work, and a member of KAOS. In the mid 1980s, having borrowed a drum machine from DJ and producer Todd Terry, Kenny took his career to the next level as a mobile DJ extraordinaire.

His deep love of vinyl is exhibited through his record label, Kay-Dee Records, a vendor of classic 45s with a 70s funk and soul vibe. We caught up with Kenny to chat about the rise of the digital DJ, and where he thinks house music is heading.

With the electronic dance music boom, do you think house music has lost its soul?

"For a minute, yes, but now it's going back to basics - it's like the 90s all over again. The whole deep house scene is happening for me. I love what the kids are doing now and I think a lot of producers and DJs are open to the music again."

What do you put that resurgence down to?

"Music always moves in circles. It has a lot to do with the technology as well, which has been a huge benefit for people that are tapped into it as we're able to do things a lot quicker than we used to. Years ago, you made your beats at home and tracked it to a tape machine, then you'd mix it to a tape machine. Now you have Ableton, Pro Tools and Logic. You can have all your stuff in a laptop or a studio computer as opposed to back in the day when you'd have hundreds of thousands of dollars of outboard equipment and mixing boards, so you're able to create quicker and easier."

In what way is the digital DJ having a positive or negative affect on how music is mixed?

"I still mix records as a DJ but there are guys that have things synced up. For me that doesn't necessarily work because it's a different crowd that you're playing to in a different country on different nights. So it doesn't work for me but guys are doing it and overdoing it, but there is a plus to it as well.

"If I got into it, I would be using software in a whole different manner than what these guys are doing. I would probably go in and out of it; go out of sync to maybe remix a track live but not to mix a two or three hour set where everything's locked up."

Does your age and experience give you the edge over modern DJs?

"I think the benefit is the way I came up and where I came up at. Coming up in Brooklyn was a melting pot of a lot of different genres and nationalities, and I was exposed to a lot of music that opened me up. I guess that's why I play the way I play, produce the records I produce and why I'm into the music I'm into.

"Experience comes from travelling abroad. I just came from Amsterdam and to me it was amazing that I could DJ at a club with 4,000 people and only play classic house. That was an experience in itself. I'm just real happy that I'm able to do play this music and still be relevant today."

What about the DJs themselves? Are they going in a direction that's more about the lifestyle than the music?

"Yeah, people do it just because they wanna floss or whatever the case may be. That's fine if that's what they're into but I didn't get into it for that. I got into it for the love of music. There are people who do it to get girls or to travel, but first and foremost we do it for the music. The audience is getting younger, which is good because now we're at that place where we can also educate."

How do you feel about the huge amount of digital dance music that's now available?

"It needed some adapting to. It's a different way of shopping, very different to going into a record store and getting a list of played tunes. That's one thing I wish these kids could witness today. There was times when particular record store owners would open up for us at midnight so we could have the store to ourselves. But you got things like Beatport so you just gotta find that stuff.

"It's hard work; it's not easy because there are thousands of records that come out every week, but I do miss the record stores."

Do you still have a preference for listening to vinyl?

"I have tons of vinyl. I also have a reissue label called Kay-Dee Records where I still do 45s. You're talking to a vinyl person, period. I was talking to a friend of mine earlier who was talking about putting a cassette player in his car because he doesn't wanna be able to spin through records, he just wants to be able to listen.

"That's the thing: with a piece of vinyl you don't get up and move it, you listen to it. One of the biggest problems of the digital world is when you have 10,000 songs on your iPod and you skip through them. That's one thing people gotta get around. As it is, I got about 60,000 records."

Before you go, tell us, what do you have going on at the moment?

"We just released part two of the Gorilla Mode EP, which is five cuts. It has Raheem DeVaughn on there, Dionne Farris, a new artist named Neysa, and a friend of mine out of Amsterdam called Man Without A Clue. That's on my label, Dope Wax, and there's tons of stuff coming as well.

"We were talking earlier about the whole circle and the 90s era. Well, it's time to release records the way we did back then - just keep 'em coming."