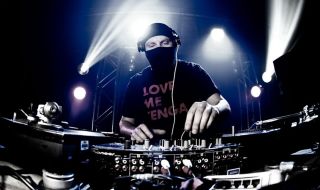 DJ EXPO 2014: Jet-setting DJ and Radio 1 regular Jaguar Skills has won a legion of followers with his amazing turntable skills and ability to put together memorable mix tapes.

We caught up with the man himself to find out more about his iconoclastic style and to discover his thoughts on the current state of DJing.

When did you realise you wanted to be a DJ?

"Well, my dad was a DJ and music producer and he used to do a lot of radio. He gave David Rodigan his first job and produced all the reggae shows on Radio London. He kept loads of records in the house and I used to wander around his huge record collection all the time. I memorized a lot of the covers - he used to check with me whether he had any doubles. Then I got my own record player and my own records, so there wasn't ever really a time I wasn't doing it.

"In 2002, I was working as a graphic designer and DJing as a hobby. I got this gig in a bar called Dream Bags Jaguar Shoes in East London. I thought, 'Yeah, man. I fucking love DJing!' I thought if I could do it as a job it would be great."

What did you love so much about it?

"It's the moment when you throw a tune up and it just fucking flips it. Changing the energy of loads of different people in a room and seeing how it affects them... that's fucking amazing. Feeling, 'Holy shit, I've just totally freaked these people out.' Taking them in one direction, then flipping it to another direction and seeing their minds blown!"

For DJs who use sync or something like Ableton Live it's harder to change tempo and vibe as quickly as a traditional DJ...

"Definitely. I use a Serato vinyl setup - I came from vinyl. When Serato came out I knew I could use it and not fuck my records up any more! Back in the day you'd need to find your record really quickly and throw it on. You can't beatmatch a drum 'n' bass record with a soul record. It gets very samey very quickly if you're DJing with Ableton or something you can't flip around."

For a lot of younger DJs, everything is laptop based and DJing is essentially an extension of production. How can more traditional DJ skills be brought back?

"It was only ever really the hip-hop DJs that were fucking around with the records so much. The party style that developed from that, which is very technical, still exists in America. The average club DJ in America would just destroy any other DJ when it comes to technical skills. You go out there and you're like, 'Holy shit, this guy is fucking incredible'.

"For musical style it's the other way around - Europe has it locked down in terms of all the cool sounding shit. So I don't think the technical stuff has completely gone. But, to be honest, that shit is corny sometimes. In a club no-one gives a fuck about how you are presenting the music. A lot of the talk is from other DJs bugging out and getting cross about how music has changed and this or that. The brutal truth of it all is that the audience doesn't care.

"It matters to me - I wouldn't feel comfortable DJing off Ableton because the flexibility isn't there. The only time people can tell what's going on is when you're fucking up. My shit's not perfect. Sometimes you can get the gist of what I'm trying to do and you can tell that it's live and there's a human element to it. Sometimes you just need to stop the tune. You can still do that on CDs too - you need that element of control.

"They tried to do it with The Bridge, which was Serato and Ableton together, but I think that was just too complicated. I just want two turntables and a mixer. Any single thing else just takes me away from what I'm trying to do. I have to have the screen to the side - I don't want to have anything that's going to stop me from looking at the crowd."

The availability of such an array of gadgets implies that 'decks and mixer' DJing isn't complex or interesting enough on its own.

"How do you present your latest EDM record, or whatever it is that you've made in a live form, without a band? You have to DJ it. Maybe you've had three massive hits and you're DJing suddenly. I've had a slog for like 15 years of fuck-ups, and slowly got to a point where I can DJ in front of 10,000 people and feel semi-relaxed and in control about it.

"It's difficult for the young guys to come out and jump on stage. They must be shitting their pants. You can have a guy in a box that lights up and then it becomes the battle of the light shows. When you get to that point, who cares what you're using? People can't see it anyway!

"A lot of the time with a DJ, no-one knows what the guy is doing. Sometimes I think that people think I'm actually making the tunes live! The regular guy who has never touched any music equipment? Music is like magic to them. I guess the idea is to break that illusion and show them how you do it a little bit, and make everybody see that you're not just a fucking robot."

What's the point of paying to hire a skilled DJ when clubs could just play the Beatport Top 10 on a loop?

"You can't control the energy of the crowd that way. If a tune's not working, fucking change it. Quick! Keep up the energy, change it around, and make people go bananas. I make people go absolutely fucking crazy at my gigs. It's because I've manipulated them to do that, you know? I can bring it down and then bring it up real quick to see them pop.

Have you had promoters try to interfere with your selection?

"Recently I was booked to play a club and I was walking through it with the promoter beforehand. There were all these posters up for an R 'n' B night. I asked the promoter if they were from the previous night and he said 'No, it's R 'n' B night!' I told him that I didn't play that and he said, 'But tonight, you play R 'n' B!' This was an hour before the fucking gig.

"I showed him a clip on YouTube of what I do and his mouth dropped open, 'What the fuck is this? I don't even know what this is!' So I had like ten records on my computer that could possibly pass and I looked at the crowd and I was like, 'Holy shit! This is not appropriate! I'm just not appropriate!' The stuff that was playing was smoothed out Usher stuff. So I played my ten records then went to the warm-up guy and asked him if he could plug his computer in and DJ on the other deck, and play records with me. He was like, 'Yeah, man! Wicked!' And he had everything. He was playing records I hadn't even heard.

"I did one gig in Asia where I got into the club and it was like five in the morning, and they were playing straight techno - the hardest techno you could find. I realised that if I went on it wasn't going to work. I was shitting it. They had this crazy fast internet connection there so I called up a DJ buddy of mine and said, 'You need to send me techno. I need all the techno!' He sent me this zip file and I went up on stage and played a whole set - I hadn't heard any of the records before. I absolutely smashed it and I've been booked there three times."