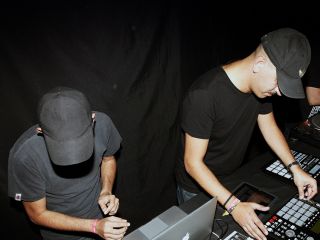 Tiger & Woods are the anonymous disco duo that first appeared on the scene with a flurry of raucous funk-fuelled edits. Spawning the album Through The Green in2011, the twosome bridge the gap between edits, sampling, remixing and production, with tracks that both disguise samples through clever audio editing and reveal sample-like-sounds that are actually their own production work. The album showcased their vast influence, sampling Imagination and other '80s slow-boogie Funk acts.

As guests at the amazing Red Bull Music Academy in Madrid, they were billed as the Chic after-party headline act, working up the crowd into a frenzy with LED lights, iPad swipes and a whole lot of MPC pad-bashing. We caught up with them afterwards for a chat to find out about their secret studio, the gear they use to produce, reasons for a fierce anonymity protocol and how they get their unique sound without breaking copyright law.

So how did the two of you form Tiger & Woods?
Larry Tiger: "I was a participant in the Red BullMusic Academy in 2008 and David was already involved with the academy."

David Woods: "I've been one of the technical tutors for the RBMA since 2004. I've been in the music business for almost 20 years now and I can honestly say that this Academy is one of the most amazing things I've ever been involved in. To be part of this almost utopian music-making ideal with thirty or more people all making music in one place and all being so passionate about it is very special."

Did Tiger & Woods form because of the Academy?
LT: "Yeah, I mean we did know each other before and did a few tracks but the project truly begun in Barcelona in 2008."

DW: "It was the first time we had time to get something done. Because I wasn't working properly, I was just doing a lecture rather than being a technician and had much more free time to hang out and mess around in the studio until 8am and make music."

So the first E.P. got enough attention for you want to do more?
LT: "It was a natural process really, just spending time in the studio doing more edits and tracks."

DW: "I guess we were trying to recreate that nice week in Barcelona when we got back to our studios. The first record was just meant to be a few sales, but we kept repressing and repressing"

Is this the most successful project that you've been involved in during your career?
LT: "For me, yes"

DW: "I've done a lot of other stuff that I won't talk about but for DJ and live shows, this is certainly the busiest project."

What's the process for making music together?
LT: "I think we take part in every single possible process. At the beginning I was living away from David's studio so we would use different technologies to make it happen. We even tried screen sharing, Skype and such, but at the end of the day there's nothing like actually being in the studio."

DW: "Larry would travel a lot to the studio too and my studio is more of a composing space with gear - a toyshop."

How are the tracks born?
DW: "Tiger & Woods always starts from samples but we love to then fuck them up and add elements."

LT: "The first part is to just to become completely obsessed with the track, second-by-second until you find those perfect loops."

DW: "Yeah, you have to go in with the lance when editing and really find those tiny portions. Even if it's just one second where the tail of that moment is slightly different. I don't think this is new though, people have been doing this with samples forever.

"We often bridge that gap between sample-based house and almost doing an edit so we have some of that original flavour but with a different accent. That's the start, then of course we begin to add our own elements. We also often use volume automation to create spaces in the samples."

Do you come from an analogue synth background?
LT: "Yeah, we have plenty, especially monophonic synths like Moogs etc…"

DW: "It's a confused studio, like the toyshop with things everywhere and some of them broken."

LT: "We spend a lot of time and pay a lot of attention to bass with our favourite synths being the Moog Little Phatty and the Dave Smith Mopho.

"We sometimes use the Roland SH-101 and the System-100, but the Little Phatty and the Mopho were the most important synths for the album."

What are you using to produce?
DW: "Ableton Live, we're Ableton freaks. For sampling, MIDI and sequencing it's like working at the speed of light."

LT: "I switched from Logic thanks to David and it really took me some time to get used to it."

DW: "I started on version five I think and I wasn't fully convinced because I'd only just switched from Cubase to Logic. I was more focused on the fact that Logic sounds amazing. But once I fully understood Ableton's way of working and it was in my bones, I experienced this true speed of working."

What about mixdown? Do you stay in Ableton or do you export stems?
LT: "It depends, but recently we feel that re-sampling tracks back into Ableton Live rather than an export render sounds better."

DW: "It depends on how many tracks and what type of tracks. Sometimes we'll try and put the tracks in Logic. Unfortunately we spent all of our money in our careers buying synthesizers rather than outboard equipment for mixdowns."

Would you be interested in getting some sort of hardware summing mixer for stemming your tracks?
DW: "Of course but whenever we have money for this we'll always end up buying more synthesizers [laughs]. We are like kids that want something that makes a noise straight away, rather than these deeply important bits of kit." [Laughs]

What would you say your roles are in the studio?
LT: "We don't have fi xed roles in our workfl ow. I'd say that probably David is a bit more musician and I'm a bit more engineer. Anyway we always try to swap positions in order to achieve something that otherwise we couldn't reach in our solo productions.For the samples it's the same thing, when one of us is in love with a song or a sample, we start work on it. I can tell you that I'm a freak for records and samples and David is a freak for machines. So, everything is mixed up…"

What has been your favourite T&W track from a production point of view?
DW: "Well, there are different ones and for different reasons. I'm thinking of Don't Hesitate where we managed to literally rebuild/recreate the original sample we fucked up. No samples are in that song anymore, even the vocal is brand new. In terms of achievement I'd say the remix of the track Simple Girl by Dale Earnhardt Jr Jr on Mute. The original is such a beautiful Folk-ish kinda song, and we managed to turn it into a proper electro boogie ballad. That made us very proud of our studio days."

What's on the shopping list for the studio now then?
LT & DW: "[DSI] Tempest!"

DW: "I'm so looking forward to putting my hands on one!"

DW: "We sort of create our own kits, some are from samples, some are samples from our machines, some are samples from records. It's the mixing. When we tried to move on from pure edit style to work with samples to create our own tracks. We'd really fuck with the samples and mess around with the sounds so much that by the end of the creative process, we just couldn't make the mix sound good. We had just messed with the original sounds too much. So at this point we had to recruit a guitarist friend to replay the guitars to how we had them from our samples and work out how to make similar string sounds and on and on. I think we actually took one of the cheesy string banks from Reason, but we needed this exact frequency from the strings to fill out the mix."

LT: "Even in the completely original tracks that we made, we tried to make a track that sounds like something that we would want to sample."

What about playing live?
LT: "When we approached the tour of Tiger & Woods we decided to play live. Properly live. We have an MPC1000, two laptops running Native Instruments Maschine, a MIDI controller and an iPad."

DW: "We used to have two MPCs running initially but we managed to squeeze it all in to one."

LT: "Having the iPad meant we didn't have to bring another computer. I can control the clips on his computer using it, plus if anything goes wrong, you can use the iPad for other stuff."

DW: "With the MPC, it means that even if all of the computers crash, we can still keep going with 50% of the music."

Have you had any disasters when playing live, technically?
DW: "We can't really say that we've had disasters as such. Sure, we've had some technical issues a couple of times, but it has always been quite fixable because we have multiple bits of kit on stage.

"Once in Manchester all of a sudden we had half of the machine acting weird, MIDI sync didn't work, FireWire cable as well... But it's also true that the venue was incredibly wet and maybe that affected the functionality.

"Another pretty bad one was in New York. First date of the American tour, and Larry's computer trackpad stopped working completely at the first song. I was waiting for some vocals to kick in and I looked at him and kinda understood that his computer had crashed. As I said before, we don't rely on the computers so much, but still the vocals were there. After few seconds of panic, we realised it was a water drop from the air conditioner on top of us, and we managed to control the all Ableton session from the iPad thanks to touchAble. It's always good to have multiple platforms with you."

The anonymous nature of your image isn't going to be easy to keep up…
DW: "As long as we don't talk about it then it's fine. I mean, we don't cover our faces at the show. But in interviews, we only want to talk about the music.

"I think overexposure is really killing the scene. We're old school and we still love the surprise element, like when you go to the record store and buy a record without knowing so much about it yet. But, don't get us wrong, we don't want to be hypocrites. We want the project to be successful and we want people to hear our music."

It must be harder to get exposure when you're not willing to be photographed and such?
DW: "Most people actually seem to have more fun with it. Rather than talk about these two guys who won't reveal their image, they go with the tiger toy image. If people find out who we are, we're not going to kill them."

To check out T&W's upcoming tour dates and for details oftheir latest releases, head to their Facebook page