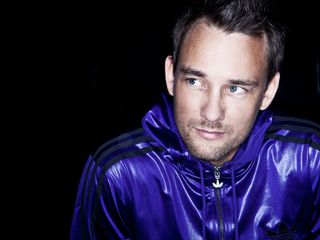 His new album, A Little Louder features a multitude of collaborative vocal performances. With this in mind, we thought it was worth asking Kid Massive how he goes about choosing a vocalist and how those royalties are carved up fairly on the final album release.

Tell us a bit about how you began to choose some of the vocalists.
"I enjoy working with singers, both upcoming and established and feel that a vocal adds a unique element to a production making it stand out from the crowd. So when it came to doing this album, I tried to challenge myself by doing something different by using a cross section of singers with a wide range of vocal abilities."

"I already knew Peyton, Sam Obernik and Mr Wilson from the house scene; indie singer Mark Le Sal was suggested by my publisher; I heard Jay Colin on the Funkerman album and the rest came recommended via friends."

Vocal collaborations are an odd concept in terms of which artists gets to be at the helm, how do you define where your track ends and the vocalist's track begins?
"I'll have an idea or structure pre-planned in my head but once the singer steps up to the mic it can either work straight away, or we'll need to rework it together. I like shaping the direction of the vocal but leave the lyrical content up to the singer, so ultimately it's an equal contribution."

How do things get arranged finically? Are your collaborators all on different licenses and rates or do you have a fixed fee in mind? What about lyrics and top-lines? Does adding all these additional creative people mean that you're sharing your royalties?
"I always split my songs and the rate is dependent on how much the collaborator has contributed to the track. If a singer comes up with an original idea encompassing feeling, lyrics and melody, then I'm happy to split it 50/50 and anything else is adjusted accordingly."

"Creating a catchy, stand out instrumental is very difficult but once a vocal comes on board then it can take on a whole new direction, something which shouldn't be underestimated. If it takes additional creative people to achieve the perfect vocal, and by doing so splits the royalties further, then I see that as an investment for my production."

What would your tips be for working with vocalists, what have you learnt over the years?
"Working with someone who knows their craft makes all the difference! Make sure you do your homework too - study singers, songs and different musical genres. You don't want to waste your time or the singer's by not understanding which type of vocal will suit your track best. I've always got an idea or vocal reference in mind before starting a session but ultimately I leave it up to the singer to do what they want and rely on their expertise. And last but not least, give them a fair split on the song. After all, they're adding an extra dimension to your work and deserve to be compensated for it."

Autotune? Effects? Tell us some of your vocal processing secrets.
"I'm not a big fan of autotune but I did use a tiny bit on Peyton's vocal for the single 'A Little Louder' but that was just to give the vocal some extra character, rather than removing any off key notes (which Peyton doesn't have, he's an amazing singer who hits the mark every time). I use a standard range of Logic plug-ins and waves, which are simple but effective, and run the vocal through an external Tubetech compressor to add warmth. All my songs are mixed and mastered to get the best final result."

What's your all time favourite house vocal and why?
"It would have to be Robert Owens, I'll Be Your Friend. Owens is simply amazing on this track, he sounds like Prince but has his own style at the same time. I was lucky enough to work with him on two occasions and he is definitely one of the all time greats of vocal house music."