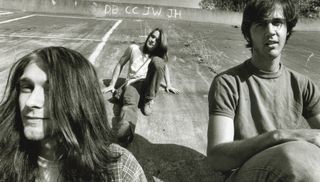 In 2011 Total Guitar marked the 20th anniversary of Nevermind with a cover feature on the album, including the story of Kurt Cobain's Jaguar and this interview with drummer Chad Channing, who played on the 1990 demos of Nevermind songs at Butch Vig' and Steve Marker's Smart Studios in Wisconsin before being replaced by Dave Grohl.

Certain dates will be forever linked to Nevermind. Dates such as its release on 24 September 1991, or 11 January 1992, when it knocked Michael Jackson’s Dangerous off the top of the US Billboard charts. Yet there’s an important time period that’s often overlooked: 2-6 April 1990.

During this five-day span, singer/guitarist Kurt Cobain, bassist Krist Novoselic and drummer Chad Channing – all of who had played on the band’s 1989 debut Bleach – visited Smart Studios in Madison, Wisconsin.

There, under the watchful eye of producer Butch Vig, they recorded early versions of several songs that would later appear on Nevermind, albeit mostly in re-recorded forms and with Dave Grohl behind the kit. One of Chad’s recordings did make the final version of the album we hear today, though, and on the 20th anniversary of the release of Nevermind, he looked back on this crucial session with us.

When Kurt presented several of the songs that would be on Nevermind, could you tell they were moving in a different direction to Bleach?

“Sometimes, it’s kind of hard to tell. When you’re actually a part of the band, any songs that come up new seem like a natural evolution of things, so to speak. They didn’t seem too far off or different in some ways. Like the song About A Girl – the answer to that in a pop vein, but being a bit mellower, would be Polly or Sappy" [a song recorded for both Nevermind and In Utero, but featured on neither].

How was the working relationship between Butch Vig and Kurt?

“Everybody appeared to be pretty comfortable working with [Vig]. Every time we’d go into the studio, Kurt and Krist always had a certain agenda or something in mind. I was never really one to be up front with putting out ideas and stuff like that. I was always a little bit more in the background… I think they were happy with the end-result recordings. I think we all were.

As I recall, when they were working on Nevermind, Kurt originally wanted to keep the songs they had already recorded in Madison to put on the record. But Geffen [Records] apparently wanted to redo the whole thing. I guess what they were looking for, being a major label, was something as polished as they could get from the band.

"So in order to do that, consistency in sound and recording is probably everything. They probably felt it would sound too inconsistent sound-wise, like: ‘Oh, you can definitely tell that’s from a different recording.’”

Several songs that would eventually be re-recorded for Nevermind were first laid down during those Vig sessions, such as In Bloom…

“I liked that song [from] the first time I heard it. Before we left on that tour, we had a rehearsal space in Seattle and Kurt had started playing that song. Obviously, he had worked it out with Krist a little bit and I just jumped right in with what seemed totally natural. What I actually ended up playing on the recording was exactly what I did the first time I ever heard the song. So it’s one of those songs where, for me, it just gelled instantly."

Did you know if In Bloom was about a segment of the audience Nirvana was starting to attract?

“Kurt never really talked about his lyrics much, or what they were even about. I remember once – the only thing about him ever talking about lyrics – we were in this hotel room, and he’s like, ‘I’m trying to come up with some lyrics. Anything that rhymes with this and rhymes with that, whatever words, just throw them out!’ It was sort of a grab bag of ideas, just spewing out words. Apart from that, he was always quiet about it, so I’m not really sure.”

You also worked on Polly…

“I remember back in 2000, or something, when someone alerted me that I actually had a song on Nevermind, and I was thinking, ‘I do? What the heck song is that?’ Then I found out it was Polly. I gave it a listen, and I’m, ‘Right! I remember now.’ There was a small little room in the studio, and it was big enough for just two people and an amp – it was pretty small. They put me in that room with my ride cymbal.

"So it was just me and my ride cymbal, and I listened to this song. Every time that one little cue part or break came up, I hit the ride cymbal. So I hit it like four times – which is all it required, the entire song – and then that was that.”

So that was the recording that appeared on Nevermind?

“It was the actual recording. It was the one song that I guess Kurt said, ‘No, I definitely do not want to redo this.’ And I guess they figured, ‘It doesn’t have a whole lot to it. There’s only a little bit of drums.’”

And an early version of Lithium was recorded during that session…

“I like Lithium too. In all, I was really grooving on all the new stuff. In fact, much of this stuff was so new that I was learning and adapting to the song, the parts and the things I wanted to play as the tour went on. [Many] of the songs we’d recorded were songs that we didn’t have a whole lot of opportunity to play together as a band and rehearse before we went out on tour.

"I’m sure Kurt and Krist played out the songs, but before we left for tour, for the majority of the songs, we maybe had one or two rehearsals. But by the end, when we got into the studio, I was pretty comfortable with what I was doing. And really, pretty much like In Bloom, a lot of those songs, they just sat right in… A lot of it fell into place really easily.”

Do you take it as a compliment that when the songs were re-recorded, Dave Grohl duplicated many of your drum parts?

“I definitely took it as a compliment. I was pretty honoured; I thought that was really great. There’s a couple of different little subtle things he did … which I thought was cool.

"But most of them are so miniscule that people comparing the records, unless they were hardcore music [buffs] – I think the average listener wouldn’t even notice that much.

"The most notable change of any of them was In Bloom: on the main verses of the song, I would just use a single kick thing, and Dave threw in an extra kick. And everything else on that is pretty much identical."

"And then with Breed too, there’s just one part where he began a drum roll fill just a half-measure sooner than I did mine. Everything else aside from that is the same. Like I said, very minor changes that most people might not notice. I thought it was totally cool. I was very honoured that he did that.”

Do you remember what Kurt’s equipment setup was?

“It kind of changed off and on, but I think he still had his Randall [Commander] head. We had a couple of SoundTech cabs for him – they were just two cabs that had 2 x 12s in them each. I remember he would set one up and then he’d set another one up in front of him during shows, or just off to the side, as an extra added monitor for his guitars. I’m pretty sure that’s the same setup that he had.

“He never really ran a lot of stuff. The only thing he had as far as pedals and effects [go] was a Boss DS-1 distortion pedal. But aside from that, it was pretty simplistic. I don’t think he ever had any guitar that he took really good care of… I think it was on tour that we brought a number of guitars for him.

"One was painted a blueish colour and one was sort of a weird mauve. If one of them got thrashed, he would just pick up the other one, and if it needed any extra parts or guts to it, they’d pull them out of that guitar and stick them in a new body. I’m trying to think which one he had during that session…

"It wasn’t like Krist: he always had the Black Eagle Ibanez. That was his staple thing all the time. But Kurt went through so many pawnshop-type guitars. It could have been any one of those.”

What do you think of Nevermind?

“The first time I heard that record, Ben Shepherd [Soundgarden’s bassist] came over… Actually, I went over to his place. He had a recording on cassette. He said, ‘This is Nirvana’s new record, you should check it out. It comes out next month,’ or something. He had somehow gotten a copy of it before its release.

"When I heard it, I was like, ‘Oh man, this is friggin’ killer!’ I loved it right off the bat. It’s one of those things where I actually became a Nirvana fan when I was no longer in the band…

"When you’re inside of it, it’s a little different. It’s work and all this kind of stuff. It was kind of refreshing to be able to kick back and go, ‘OK, I can totally listen to it.’ Because any time I hear my own music, I always get in this critic mode. I can’t really relax and hear it for what it is. When I heard that record, I was like, ‘Wow!’

"One, I really liked the record and thought the songs were great. And two, I was like, ‘OK, I can really get into it,’ and it was nice to know that it wasn’t me I was having to listen to!”