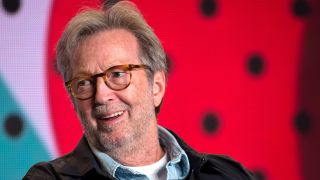 Dialling back on some recent doomy - and mischievously misinterpreted - musings, blues icon Eric Clapton has been more positive about the state and importance of the guitar in an interview with Rolling Stone.

"It is still the most flexible instrument," insisted the guitarist. "You can improvise on it. You have such freedom. I don't think there is a limit to it."

Eric Clapton: "Maybe the guitar is over"

Where previously, against a gloomy backdrop of declining instrument sales, Clapton had mused, "Maybe the guitar is over", recent experience mentoring an emerging talent seems to have left him in a more positive frame of mind.

"In the last few months, I've been talking to a guy who doesn't know where to go next. It was a conversation with a young musician who contacted me through some friends... He said, 'Do you want to listen to something?' It was esoteric and abstract, and I thought, 'Where would this go?'

"I wanted the guy to be taken somewhere. I could hear that he was in his own head too much, and that can be a cul-de-sac. There is always something to listen to, to aspire to, with the guitar."

"Anyone who talks about guitar as a spent force should listen to Roebuck Staples [founding guitarist of the Staples Singers]. It is so moving."

Eric Clapton was discussing Eric Clapton: A Life in 12 Bars, a recently released documentary looking at his life and work, featuring interviews with many of his peers, including BB King, George Harrison and Jimi Hendrix. For more on that and the full interview, head over to Rolling Stone.