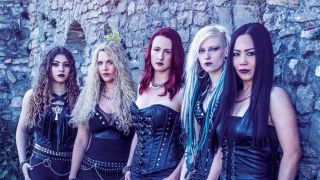 Inspired by Dave Lombardo, John Bonham and Exodus’ Tom Hunting, Lala Frischknecht had almost turned her back on drumming when she auditioned to join Swiss metalheads Burning Witches in 2015.

Since then, Frischknecht and the Witches have taken the metal world by storm, releasing two albums showcasing their classic metal sound that recalls the attack of Warlock and Judas Priest.

Have you been surprised by the speed of Burning Witches’ rise?

“You don’t see many all-female bands playing heavy metal. The first album got some attention in Switzerland, Germany and Spain. After a few years we were signed to Nuclear Blast. Burning Witches are only three-and-a-half-years old, it’s like riding a fast train.”

How did the band arrive at that classic metal sound?

“We don’t want to be trendy. Many bands want to do the growling thing or play something technical or brutal. Before any of those styles even started, there was heavy metal and we thought about keeping the tradition alive.

“All the elements are there, harmonious guitar riffs, double bass drumming. It’s not brutal or technical, but heavy metal is just beautiful and it’s really nice to play.”

How did you get your drum sound on the self-titled debut and new album Hexenhammer?

“I like my toms to have depth and sustain. I cracked a lot of Vic Firths because I love snare rimshots. The drums I used are Premier. It’s not my kit, but I love the sound of Premier drums, so I borrowed them from my friend who’s a drummer in Switzerland.

“He introduced me to Istanbul cymbals. I don’t want to use anything else now. I still don’t have an endorsement but I’m hoping to get one because we’re touring a lot and it would really help in case of emergencies.”

What have been the highlights of playing with Burning Witches?

“It’s always exciting to be with the girls because our relationship is just like sisters and we understand each other. Some people say it’s difficult to have an all-female band but, actually, it’s totally the opposite because we enjoy each other’s company.

“Our highlights are when we go to a big festival like Bang Your Head. It’s a great experience to play alongside your idols. We’re a new band and after just a few years we’re playing big stages, it’s unbelievable. It’s a dream come true.”

How do you deal with the pressures of touring with the band?

“I’m always listening to music, listening to jazz, then before sleeping I use my lavender oil. I drink coffee, espresso, I take some supplements and I go to the gym to stay fit.

“I know a drummer in Japan who plays brutal technical death metal; he also runs marathons. I can’t do marathons, but the gym will do. I always make sure that I have enough sleep, because once you don’t have enough sleep it affects whatever you do.

“Also, don’t drink too much alcohol before playing. That’s the key, because I remember when I drank three beers and my sticks flew away from me!”