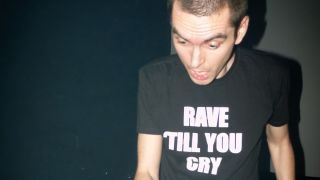 Legend has it that Polish American braindance artist Bogdan Raczynski was discovered by Aphex Twin while sleeping rough on the streets of Tokyo in the ‘90s.

His subsequent career has been as unconventional as its beginning. As well as producing his own music he’s collaborated with Bjork and remixed Autechre, but his last studio album, Alright!, was released back in 2007.

His return comes via Rave Till You Cry, a collection of 18 unreleased tracks plucked from 20 years of ‘irregular rhythm science’.

To mark the occasion, we asked Bogdan to spill the five things he’s learned about music production, and it turns out that his advice is as off-kilter as his beats. Enjoy the ride...

1. Stop reading about art and artists

“Once upon a time, there was a musician that I admired on a deeply emotional level. I even named my car after a song of theirs. I was so enamoured, so smitten. The light at the end of the tunnel was so crisp yet encompassing when this music came on. It transported me back to the age of three-year-old innocence, when there was only that which was in front of me, and all else was for the tall people whose world I wanted no part of.

“Then, I read an interview with said person and suddenly everything went dark. The ensuing smog was as wide and lasting and potent as the interstellar dinosaur-destroying meteor. It was gut wrenching. The patina disappeared, and before me was a bonafide fucking fraud.

“Sure, the music was good, but in my humble opinion, it's meaningless if it's made by a piece of shit.

“And if you ask whether I'm promoting ignorance, whether I'm suggesting that it's better to simply plug your head deep in the sand then I shout a resounding YES! Art is an arms race. Imagine our planet, our species, our kindness, our impact on Earth, if humanity had creativity as its core objective.

“While capitalism subversively rewards lowered, inward-looking empathy with increased profit, art bends outward. This is a literal battle between guns and sound. But don't despair; look around you. What do people yearn for - more time to do accounting or go to concerts? THIS is your mission! This is our battleground. It is no fucking joke - humanity depends on it.

“I was never able to listen to their music in the same way. Since then, I run from artist interviews.

“It's your call, though. Take that chance, roll that die, but make damn sure you're ready for your inner being to be shattered and your musical foundation obliterated over the course of single sentence.”

“It sounds really pretentious. Alright, in fact, it is really pretentious. But I wholeheartedly believe that listening to music will inevitably and surreptitiously affect your own genuine sound. Perhaps this isn't a concern, or maybe it's even your goal. It's conceivable that this influence is just a vital step towards finding and perfecting your own style.

“But if you have even remotely interesting sounds clamouring around in your head - a little riff, a single tinkle, a couple of notes strung together that you're too sheepish to share, anything - then do your damnedest to block other influences. They will likely win out in production quality, or be deemed more popular or admirable than your stuff.

“Ultimately it will all conspire to make you doubt yourself. And if you don't grab those fucking reins to steer that boat you are headed down a waterfall of mediocrity. Or worse yet, you give up entirely.

“What to listen to, then? Foreign bits, instrumentation that is completely alien to yours. Think of your listening not as an affirmative exercise but a meditative, restorative or exploratory one.

“The closest I got to achieving 0ms latency between myself and my music was when I was using trackers. They are highly crude and limited beasts with a particularly narrow set of parameters. There were no VSTs and MIDI was alien to me. I used my headphones as a mic.

“And yet, during that period, I was able to make the most honest translation of this inner joy and energy that I feel and longed to express. Gone was the binary toggle between keyboard and mouse. Missing was the urge to try various plugins. I had direct, unthrottled, unlimited bandwidth - instantaneous connection, and fuck all was going to stop me.

“Gear is a trap, an endless journey of 'what ifs' and 'what abouts' and 'if I only had'. Gear is an infinity mirror of diminishing returns. Gear is an intestinal worm that will eat away at your musical joy until it's an empty barrel filled with wet, mouldy scraps of tattered refuse lined with specs, numbers, parameters, and connectivity conundrums.

“Eventually, your battery will die; the one that powers that beacon which is trying to tell your brain that maybe these are impractical rabbit hole purchases and cautions that you'll never ample time to read the manuals for all this goddamned gear.

“And then you'll find yourself at 4am on a Sunday morning, rage posting everything but your computer on ebay for 1/10th of its original value. The tears will slowly but necessarily percolate as you begin this important descent from Mount Gear. Maybe you made it to the top. Perhaps you even got everything hooked up and synced up and the magazines are lining up to feature your studio. But what good is the apex if you can't breath?”

4. Remember that one day you're going to die

“Have a serious sit down with yourself and evaluate your musical style. Do you really want to be producing Jump Trance? Are you sure that your true self is embodied in Minimal Bounce? In your heart of hearts. were you put on this planet, evolutionarily speaking, to advance the cause of Math Beats?

“You'd better be fucking sure, because if you have the privilege of lying on your deathbed for long enough to ask all of these important questions, it'd be a real pity to come to the conclusion that you  wasted away your true sound. Or worse yet, you never found it to begin with.

“Don't let that impending, foreboding, ticking and tocking frighten you. Don't jump into that hedonistic viper den that is carpe diem. CTFD. Focus your energy on finding the cleanest, simplest, and most direct lane to your true self. Sleuth out that vibrating din which is comprised not just of the art you enjoy; that's just the first layer.

“Listen also to the experiences, people, heartbreaks, pleasures, sunshines, snowy days, tangibles and intangibles that are you. Within that maelstrom, that most personal milieu, lies the promised sound. And when your time is up, that output is all that lingers. How fortunate are you to have a chance to send a message to the future and potentially progress humanity? Seize it!”

“If no spark ignites from an idea then move on. Leave it in the dust. Time is too precious.”