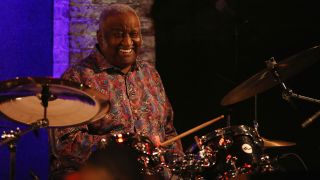 As session drummers go, few are able to get close to the prolific output and phenomenal feel of Bernard Purdie. With over 4,000 credits to his name, even Purdie admits that an examination of the artist in full could be quite an undertaking. "It's a lot of music. I had fun making it, so I hope everybody still enjoys listening to it."

To many, Purdie is synonymous with the half-time shuffle, so much so that it is named after him. The Purdie Shuffle – that distinctive, much-imitated marvel of soulful syncopation, interpreted by giants like John Bonham and Jeff Porcaro, just to name a few. Turns out the inventor of the two-measure treasure wasn’t thinking drums at all when he came up with it – he was imagining a train.

"The way a locomotive kind of pushes and pulls, that's what I was feeling," says Bernard Purdie. "I played it for my music teacher, Mr Leonard Haywood, when I was a kid, and he tried to stop me. 'That's not the way to play a shuffle,' he said. But I heard what I heard - whoosh, whoosh, whoosh - so I kept it.

"Eventually, he said, ‘OK, you work on that. It that could be something… but not today.’ [laughs] That’s all right. I knew I’d get my chance.”

He wouldn't have to wait long. While other youngsters were dreaming of Little League glory, Purdie was well on his way to becoming a working musician. His first gig was at a local blues club near his hometown of Elkton, Maryland.

While still a teenager, Purdie moved to Manhattan. In his first week in town, he recorded a remake of Mickey & Sylvia's Love Is Strange, for which he received $80 for four hours of work. "I was rich," he says. "That was huge money back then. It's still good money now."

Since that monster payday, Purdie has played on over 4,000 recordings, working with artists such as Ray Charles, Aretha Franklin, James Brown, Steely Dan, Cat Stevens, Quincy Jones - and the list goes on.

"Whenever these people hire me, they're looking for a human element," says Purdie. "There’s lots of drummers who can play a part, but only a few have their own style. The Purdie feel is like a heartbeat, and there’s ghost notes and rebounds in there. It’s loud, it’s soft, it moves - that's what I do. I give you a real pulse to our music."

To many, Purdie is synonymous with the half-time shuffle, so much so that it is named after him The Purdie Shuffle – that distinctive, much-imitated marvel of soulful syncopation, interpreted by giants like John Bonham and Jeff Porcaro, just to name a few. Turns out the inventor of the two-measure treasure wasn’t thinking drums at all when he came up with it – he was imagining a train.

Here, Bernard Purdie takes us through the six tracks that have helped shape a unique session drumming career.

“I had already recorded with Steely Dan - we did The Royal Scam, which was pretty wonderful - so I was happy to work with them again. It was funny on this song: They were telling me everything they didn't want, and I said, 'OK. It sounds like you want the Purdie Shuffle.' And they were like, 'No, no, no! We don't want a shuffle.' So I said, 'Well, how about I just play it, and you give a listen?'."

"That's what I played, and they loved it. We had the rhythm section going on that - Chuck Rainey was on bass - and it sounded great. We recorded it quite a few times, but I remember telling the guys that we got it down in the first or second take. "The Purdie Shuffle really worked on this song. After we did this one, they didn't question me anymore."

“This was Ralph MacDonald, one of the writers of the song. People do not know the sensitivity of this man. The essence of the song came from Ralph, and the delivery came from Donny and Roberta. Donny was playing a Fender Rhodes, and Roberta was on a piano. They had a conversation on their instruments, but the real communication came from their voices.

“My job was to interpret that dialogue, to accent their words. My other job was to keep them happy, keep them in the proper mood. I played smooth, and I stayed out of the way. But you still felt me - that's the trick. Of course, having Chuck Rainey on the bass made it easy. I’m very restrained on the drums, but I’m full of energy. That’s what Chuck Rainey brought to what I do. We were quite a good team."

“Here again, I’m was working with with Arif Mardin, the producer, and he was great at setting a mood. I really enjoyed doing this track. It was soulful, understated in parts and then it gets real big and powerful.

“I like my drum sounds here. I used a high-pitched snare, and I let it sing. Sometimes I used to dampen my snare with a towel or even my wallet, but not on this one. This one was nice and open. Arif Mardin was very happy with my playing, but he was particularly pleased with the way my drums sounded – less for him to fix.”

"I think it's one of James Brown's best songs ever, and it's certainly one of his most powerful slow songs. There's a lot of drama going on here. James was begging and pleading when he sang the lyrics. It's a very moving performance.

"Sammy Lowe, the arranger, told me he wanted what he called an 'old-fashioned triplet' thing on the hi-hat. I tried to play it straight, but I didn't like it, so I gave it more of a dance, a bit of a flair, and it really worked. As for the rest of it, my goal was to stay on top of the beat, keep focused and drive the energy. Even though it's a ballad, it had to pump."

“That was done in New York. We had played at the Fillmore East. The session was great – so simple and laid-back… I think we could have recorded anything and it would have had feel.

“BB started playing, and we all just fell into it. Now, I know BB doesn’t play much, but it’s about that little thing or two that he does play. That’s the stuff you have to follow. The rhythm guitar player did more of a beat to it, and that’s where I put the Purdie Shuffle.

“On something like this, you bring it all back. You don’t force it. It’s like you’re playing your thing, and you let it come out.”

“The famous drum break was an accident. We were playing, everything was good, and next thing you knew Aretha’s music came flying off the piano. Somebody had to come and pick it up, but while this was happening, she's singing: ‘Rock… steady… rock… steady.” And I did a drum break. It just came to me.

“We had that song down. The key to it was Chuck Rainey’s bassline, which was very fat. That’s the kind of bass that lets me keep the beat but turn things around. I followed Chuck, but he followed me, too. The funny thing is, I’m on top of the beat, not behind. I was anticipating Chuck.

“It’s one of the grooviest tracks ever, and it’s constant. When I played it, I didn’t think I was doing anything special, but when I heard it back, I liked it. It's funky. The tempo is there, the energy… Once you get a grip on that, you can’t lose.”