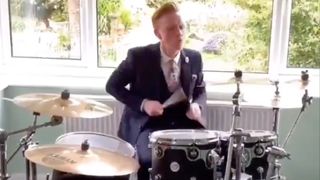 BBC North West Tonight weatherman, Owain Wyn Evans has created a deluge of likes and shares as a video of him drumming along to the BBC news theme has gone viral.

The presenter ended his weather forecast with a touch of thunder by jumping behind his DW Design kit and bashing out some pretty decent fills along to the instantly recognisable theme tune.

When they said try working from home I didn’t realise they’d expect me to do the music too @BBCNews @BBCNWT #BBCNewsTheme 🥁 #workingfromhome pic.twitter.com/DVXjDw0l8FApril 15, 2020

In a tweet sharing the video, Owain wrote, “When they said try working from home, I didn’t realise they’d expect me to do the music too.”

He later told the BBC, “I’ve got to be honest, it’s such a banger isn’t it? You know, it’s a great song, and why not put some live drums over it? The response has been fabulous. It’s had over 1.5 million views now on Twitter, and I absolutely did not expect that to happen.”