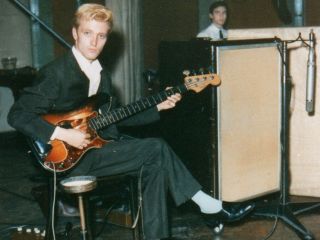 BASS EXPO 2014: In the fifth part of our History Of The Electric Bass we look at how the development of bass amplifiers enabled electric bass players and their bands to take their shows from clubs to stadiums.

The two main reasons for inventing the solid body bass guitar were portability and increased volume, as within a band the traditional upright would often go unheard. From the moment it became a reality the bass guitar needed a dedicated amplifier, something that could handle the excesses of this powerful new instrument. Naturally those manufacturers who could produce both instrument and amplification were in the ideal place to introduce something that was truly worthy.

Famously Fender produced their Bassman combo in 1951 specifically for use with the Precision Bass and it's been in production pretty much continually ever since, although styling and speaker compliment has changed many times. Initially it was presented with a single 18-inch speaker but such was the technology of the time it proved unable to safely handle the excesses of the Precision's bottom notes.

In 1954 it was upgraded to four 10-inch units and a star was born! After several modifications to the amplifier in 1958 the best circuit to date was introduced and became the inspiration to other manufacturers the world over.

During the sixties the Bassman was split into head and cabinet in piggyback style with a variety of speaker combinations. It even went solid state for a while with a small 100-watt head and a 2x12 cabinet hosting a pair of Lansing speakers. Curiously the British cabinet looked slightly different to those in the American catalogue but the combination worked well enough, which is more than can be said of their transistorised guitar rigs of the time.

Rickenbacker introduced the M-15 as a bass amp in the mid fifties and was probably the first manufacturer to include a tweeter when, towards the end of the decade, it added one to the single Jensen P15N 15-inch driver. Most other American companies were offering general-purpose amplifiers that were 'suitable' for bass - like the Carvin 666, which, for 1957, was indeed a bit of a devilish beast. At 30-watts it presented good power and it also used four speakers, but sadly the 8-inch units were severely lacking in bottom end performance.

In spite of being 'recommended for bass' Carvin's TV fronted 8888-B of 1958 also failed to be a dedicated bass amp. It did use tougher 5881 valves rather than the more common 6L6's and instead of the four Jensen 8-inch Concert speakers you could opt for the 15-B model with a single 15-inch driver. However, it still came with three inputs and included tremolo making it general purpose yet again!

One of the main competitors to Fender was Ampeg whose first bass amp, the Super 800, offered 18 watts through a single 12-inch speaker. In 1951 they offered it with a 15-inch driver and a power boost to 20-watts, but it was the introduction in 1960 of their infamous B-15 Portaflex with the flip-top amp that really gained popularity. It was a brilliant concept, with the amplifier safely housed inside the 1x15 speaker cabinet during transportation then flipped over so the amp sits on top of the cab when in use. It was safe and secure to haul around and the ultimate in air-cooling during a performance!

In the late fifties in Britain Vox were very much leading the way when they introduced the AC15 and AC30 bass amps primarily for Jet Harris of The Shadows who had been using a Pepe Rush cabinet in the studios at least. In both sizes it was pretty much the same as the regular models but with a modified circuit to give it warmer tones and a heavier duty speaker.

The AC15 had a Fender like 'TV front' as did the early AC30's but both were soon redesigned with the flat facia above the distinctive diamond grille cloth that is still in use today. The great thing with these early Vox amps was that they used military spec components so the circuit was massively over engineered, hence they were perfectly able to handle bass guitars. Fifties rock 'n roller Marty Wilde has often commented that the first time he saw The Shadows he was amazed at the volume of Jet's bass, which proves just how well it worked.

When The Beatles came on the scene Vox built even bigger units to help them be heard over all the screaming, but in reality it didn't make that much difference as the screams just got louder too! However, in 1963 they also introduced the Foundation bass cabinet with a single 18-inch driver and that really did supply some serious bottom end.

In the mid sixties transistors were seen as the next big thing. American companies embraced the concept and here Vox responded with the T60 head and cabinet, which employed a specially developed Celestion 15-inch speaker along with the Blue Celestion G12 speaker specially designed for Vox.

At this point in time Burns made themselves known in the bass world with the introduction of the Double B. This was a really small-transistorised head and a truly monstrous cabinet but it sounded huge. However all this transistor technology was relatively crude and when subjected to the excesses of a bass guitar these heads were prone to severe overheating, which could lead to components actually dropping out as the solder melted! However the Vox domination of the British market was about to be challenged.

Marshall's Music shop started trading in 1960, initially selling drums then gradually American guitars and amplification, but almost from the outset they began making bass gear. In a way they remained one of the best-kept secrets until the introduction of the Marshall Stack in the mid sixties.

Cream's Marshall stack, as featured on the back cover of the Live Cream album

With a hundred watt head sitting atop of two 4x12 cabinets the sound projection was truly stunning. Championed by the likes of Cream and the Jimi Hendrix Experience every British band was keen to be a member of the 'Marshall List' that was a feature on their whole page adverts in the music press. But it was John Entwistle of The Who, upgrading from using two Vox T60's for a Marshall rig, that really captured the imagination. He had a pair of the new 200-watt Marshall prototypes and used a split lead so he could have one stack focussed on the treble end and the other on the bass. Bi-amping was born and suddenly the possibilities seemed overwhelming.

Many other companies sprang up in Britain following the Marshall lead and soon you could choose from Park (Marshall built), Elgen, HiWatt and Orange to name just a few. The ability to use any quantity of heads and cabinets was a heady formula and it was these monoliths that paved the way for stadium back lines, thus helping bands to play much larger venues until PA technology finally caught up and then overtook basic stage amplification.