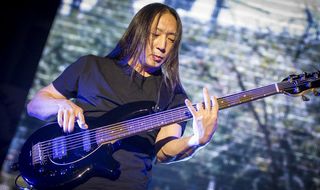 John onstage at the Mediolanum Forum in Milan in January 2014

BASS EXPO 2014: After 30 years in the game, many bands would be content to rest on their laurels. Not so Dream Theater, the progressive metal titans who have spent the last three years going from strength to strength, releasing critically acclaimed albums and garnering Grammy nominations for hard hitting tracks such as The Enemy Inside.

We sat down with bassist John Myung before the band's recent show at Wolverhampton Civic Hall to discuss the group's self-titled 12th album and the killer bass tone that powers it...

Dream Theater are riding high at the moment. Why do you think this is?

"Things tend to go in cycles. We were able to write a really satisfying record and that, coupled with the enthusiasm of the label and our touring seems to be working. It seems like we're always taking it up another level."

What are your favourite bass moments on the new album?

"There's a lot of cool bass breaks in Enigma Machine, Illumination Theory, and Behind the Veil - lots of moments where you get to hear the real tone of the bass. The bass sound was also a big part of it this time. I found a really cool tone that kind of dictated the sort of lines I played.If you work with a really resonant tone, you don't have to play that much to feel satisfied with what you're hearing. Also working with Rich Chycki - who has done a lot of work with Rush - was a very big part of it."

What is your contribution to the Dream Theater writing process?

"It could be a riff that sparks the journey of a song, or a suggestion of how to develop a certain part. It's different with each song, some of it just happens magically and there were a lot of cool moments where we would stumble upon something without thinking about it.

"Sometimes I'll be jamming with Mike [Mangini, drums] and John [Petrucci, guitar] and we'll play something that hits us the right way and we'll record it, listen back and develop it. But some ideas are things we might have had kicking around for a while, and some might be spontaneous things that have happened in the studio."

How would you describe your fingerstyle technique?

"It's a fluid motion of going right to left and becoming comfortable with that. Some lines might seem really fast and busy, but when you utilise the proper technique they're actually relatively easy to play. But it's not all about playing with three fingers because when I'm not playing a part that's busy, I'm also thinking about attack and how I want it to sound.Different finger combinations will produce different sounds because each finger will attack the string differently.

"But once again, the coolest thing about the sound that I had on this record was that it was able to breathe and I wasn't having to run effects or try too hard to make it sound a certain way.Then when I did lay into the bass and play louder it would break up and develop this 'fiery' overtone which would fill the track with energy while still supporting everything up on top. Then I could lay back and it would disappear and just become a nice round tone. That's definitely what I'm going to continue aiming for in the future, that element of breath, where you don't have to try too hard to sound good."

What changes have you made in terms of equipment since the last album?

"The basses that I'm using now, we've been working on for a few years. I tend to live with each prototype for an album or a tour and then think about what I need to change. Going into this record, I had been working with a prototype that was a Bongo with a six-string body and the neck that they would normally use on a five-string. I had it modified to have a natural wood finish on the neck and a more generous neck contour, which feels better in my hands.

"In the studio I had two basses with different pickup configurations - one a single humbucker, one a dual humbucker. I don't really mess around with the tone controls on my basses, but I do have a four-way selector switch that enables me to change the pickup wiring. Actually, the HS bass just has a volume, no tone controls at all. I like to limit the amount of change that can come from the instrument so that if something doesn't sound right, I at least know that the bass is stable."

How did your relationship with Music Man basses start?

"Going into the Systematic Chaos album, I wanted to change things up so I talked to Music Man about making a six-string. I never really know what I want beforehand, it's only after living with something for a while that I think about what I need to change. I really appreciate the instrument I have right now and I can't thank Music Man enough for getting me a bass that I feel really at home with."

Can you talk us through your rack?

"The main component live is a Demeter HPB1 Bass Preamp, which I use to generate a little bit more air in the sound. In the studio I had that going through a Monoblock power amp, a JDX direct box, and a Demeter cabinet. I had an MXR compressor and a Mesa Boogie Grid Slammer pedal which gave the sound that 'fire' that I was talking about earlier.

"In the studio I used a Demeter VTMP-2B valve pre-amp which gives me a resonant, warm tone that is like the cohesive glue. I also have the Fractal Audio Axe-FX, which I use for amp modelling as it enables me to carry around multiple sounds that come from pieces of gear that I can no longer accommodate in my rig, like the Pearce BC1."

Looking back at your beginnings, what can you tell us about how you got started on bass?

"I grew up in Kings Park, Long Island, along with John [Petrucci]. We went to school together, but were mostly in different bands. From the age of 12 or 13 we had a strong interest in forming bands and playing music. A lot of my friends had older brothers and sisters and we would always go through their record collections, checking out groups like ELP, Yes and Rush - that was a really big influence on us.

"There was also a lot of jamming and learning cover versions after school - I played along to a lot of Black Sabbath and Rush records. Looking back, I feel really fortunate that I lived where I lived and that I had the friends I had."

Any advice for young players?

"You have to put time into your instrument. More than anything else it's about time, there's no replacing that. There's no magical riff, pattern or scale, it's all just twelve notes and a persons imagination. There's a lot of books and teachers out there, but the real teacher will always be yourself.

"Even as kids, John and I would have a rule that we would practice six hours a day. That carried on at Berklee too. We would play from six in the evening through to midnight Monday through Friday - that's a lot of hours! We knew what we wanted, but we knew we had to put the time in."

You're well known for practising a lot, particularly before shows. What exercises do you do?

"What I do works for me. It's mostly trilling between different fingers and playing through all the different possible combinations of how your fingers might move. After an hour and a half of that I feel really warmed up and able to play anything I might be having problems with. It doesn't sound musical, but it works for me."

How does it feel to have been an inspiration to so many young players?

"It's great that we're reaching a lot of people, it makes me think that we shouldn't change what we're doing! As time goes on, they'll take it and do their own thing with it and that's the best part about it. Where's music going? Pay attention to what the young kids are doing with it today."