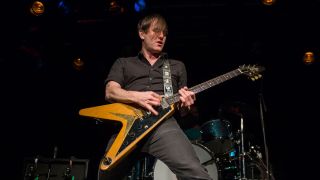 Ash are one of those bands to whom we owe more than we might first imagine.

Before streaming happened and we all started listening to everything and nothing, Tim Wheeler’s trio represented a neutral point of cross-tribal appeal. The pop kids liked the choruses, the punk kids the powerchords, and there were killer solos for the classic-rockers. Ash were one of a few bands that might survive a full album rotation in a communal setting.

How many of today’s guitarists heard their first lead courtesy of Wheeler? How many bands have been formed in sticky-floored clubs as The Girl From Mars closed out the night? Who else would have had the brass balls to keep the Flying V alive in flagrant violation of the rules laid down by Britpop?

Returning this week with Ash’s seventh album, (the actually good) Islands, we spoke to Wheeler about spending major label money in guitar shops, how to write an Ash mega-hit and a story of ceremonial guitar burning.

What was the first ‘good’ guitar you ever owned?

“My first good guitar was a late-'70s Fender Strat, bought for about £200 from a newspaper ad. Then, when we got our first advance, I couldn’t believe it - I was 17 and I was dead proud to be able to go and buy a Les Paul and a Marshall amp. I was a big Thin Lizzy fan so I was dead excited.

“When I was young, I used to just look through all the guitar magazines and just draw around one of everything, as you do! I’ve got a decent collection now, over the years. I was lucky enough to buy a 1960 Les Paul Black Beauty through a dealer in the '90s and obviously the price of that one has sky-rocketed, so it’s become really valuable. That’s the main guitar I use on the recordings.

“Then I’m quite known for playing a Flying V. That was like one of my heavy metal dreams coming true when I was young. I was also lucky to be touring the States in the '90s when you could get quite good deals, so we’d go around all the guitar shops and there was always some cool guitar or pedal to be found. It was dangerous, but back then the prices weren’t so insane on that vintage stuff.”

Your timing was good. These days, most new bands don’t get the thrill of the advance and the trip to the nearest guitar shop...

“Shit, yeah, I hadn’t thought about that. When we got our first advance, we just went straight to Denmark Street and bought a load of gear. It felt awesome. I got a Les Paul and a Marshall. I think it was one of their 30th anniversary combos.

“It was a three-channel amp and it was the first time I’d had more than one channel. That was really awesome, to go from the clean sound, to something quite chunky and then something blistering on the third channel. I’d never dealt with a piece of equipment like that.

“Then the Les Paul was a black Standard, probably a 1994 model. It’s nice - I still have it. Though I did set fire to it backstage at a gig once. I totally defaced the top layer of it, but it comes out to play every now and again.”

You set fire to it! How did that happen?

“I don’t really remember why. I think we did this gig where we were playing with Iggy Pop and David Bowie in Leipzig in West Germany. We played in the middle, because I think David Bowie didn’t really like performing directly after Iggy Pop! We played this bill and I think it was just the thrill of the thing, but I wound up burning this guitar. We had a little ceremony backstage. It made it kind of interesting. The surface was all blistered and then I carved it up with a knife. I don’t know why...”

What kind of things are involved in a ceremony where you set fire to a guitar?

“Err, I guess the ceremony involved drinking! I did smash that guitar a few times as well. I was really gutted [the first time] because I was 17/18 and I was sitting in my bedroom doing homework and I had it in a guitar stand. I brushed past it and it fell off the stand and snapped the headstock.

Let’s talk about the new album, Islands. Did Your Love Burn Out? has a killer blues-rock solo with a great unwieldy tone. How did you get the guitar sound for that one?

“I would have definitely used my 1960 Les Paul Black Beauty and a Matchless HC30 amp on that. Then there’s some Echoplex going on in certain parts of the solo. I double-track most things, especially solos.

“The second half I doubled it an octave up, I think on the Tone Bender, which is quite nice on the long notes. It breaks into like a really gnarly hum that only just holds together. With that, I was mostly playing the melody from the verse, which is something I’ve loved since Smells Like Teen Spirit with Nirvana. You don’t have to be complicated, and then I added some fun licks towards the end. It didn’t get too complicated.

“I like to throw some technical bits in here and there - little bits of flashiness - but most of the time, the main body I like to be melodic and simpler. But, yeah, with dashes of flash!”

You’ve always been a champion of guitar solos. Do you think they’re making a comeback?

“I don’t know. I’ve just always consistently done it. Even when it’s been really uncool. I just really love it. I do remember at one point our manager going, ‘[Sighs] chill out on the guitar solos!’ But I love putting a guitar solo in a song if I can.

“This record it’s a bit less, but some records have a solo in every song. I think that’s just my heavy metal and hard-rock side that always wants me to do it. One of my favourite bands is Thin Lizzy, and there aren’t many Thin Lizzy songs without a guitar solo. I definitely persevered with it in the '90s. When it wasn’t cool to have flash solos, I was still doing them. I’m glad if it’s coming back. I love it. I’m all about it.”

What are the solos you’re most proud of when you look back over your catalogue?

“I do like the Girl From Mars one. It’s just a short solo but people have given me props for it. For an indie kind of hit it’s rare for them to have solos so I think that’s cool. There’s a track called Vampire Love on Meltdown, and I really enjoy that solo.

“Then on our A-Z stuff, there’s some crazy solos that I really like, where I was getting into sweep picking at the time. There’s one called There’s Hope Again that, well, it’s not a million miles from The Final Countdown solo! I really enjoy that one. There’s some good solos on volume II of our A-Z singles.”

If you look at your mega hits - Burn Baby Burn, Shining Light, Girl From Mars - what do you think it is about those songs that makes them connect?

“I guess they’re just the ones that have the magic combination of all the things you need. Sometimes it’s an interesting lyrical idea, a great melody and then a cool feel in the music, perhaps something interesting in the rhythm as well.

“When we were 15 and we wrote Jack Names The Planets, that was really at the start of Ash. It was the first song of making the stylistic change from trying to be a metal band to this new grunge style that I was into. It felt like it was a really good song and the first gigs we played it at, people could really see the change in us. That song went on to be our first single, and we still play it now.”

Islands is out on 18 May via Infectious.