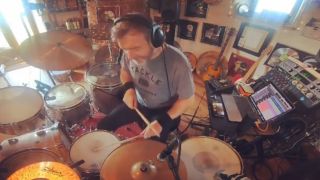 Ash Soan has shared a tribute to Bill Withers, with clip of himself playing along to a cover of the Withers hit, Use Me, from a 1998 recording session with vocalist/keyboard player, Tony O’Malley. The track featured on O’Malley’s 1999 album, Freedom Road, and as Ash mention’s in his Instagram post, also features Pino Palladino on bass, Average White Band’s Hamish Stewart on guitar.

As you might expect with such a convergence of groovesmiths tackling a funk classic, the quartet nail a fresh take on the song. Ash’s groove - filmed in his Windmill Studios -  gives the song a driving neo-soul feel, switching effortlessly between a piccolo snare and his trademark ‘fat’ auxiliary snare, while dropping in some well-timed floor tom fills and hi-hat accents.

As an additional bonus, when asked by producer David Read in the comments section for a sample of his deep snare, Ash responded with ‘I’ll think about how to share it”.

If you can’t wait to get your hands on a hybrid-friendly sample of the sound, you could try Toontrack’s UK Pop EZX expansion pack for EZdrummer, which captures the sound of multiple kits, snares and cymbals from Ash!