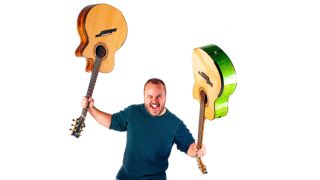 Since then a whole tribe of YouTube-based players have sprung up and used the platform to showcase their talent, build followings and promote their music. At the core of Andy's success though is remarkable musicianship, beautiful technique and a strong sense of melody.

We sat down with the guitarist as he passed through London to talk about his early days, nailing his techniques and the weird and wonderful instrument that is the harp guitar...

What was the first song that inspired you to take up the instrument?

"The first song I heard that made me really want to play guitar was Eric Johnson - The Cliffs Of Dover, the instrumental. I was even in to heavy metal at a pretty early age, but I'd not thought about playing the guitar. But when I heard this instrumental guitar thing, it really resonated with me. It was so cool to hear a melodic line on the guitar instead of a vocal line and to hear the guitar being used in that way."

How would you describe your playing style, if you had to sum it up in just a few sentences?

"Shoot... I usually just say 'modern instrumental acoustic guitar'. It's a bit of a mouthful, though. I've seen interviews with Michael Hedges from years back where he was always calling it different things: 'savage myth guitar' or 'heavy mental' or 'heavy wood'! We're all trying weird things, new techniques and altered tunings that make us compose intuitively, more than relying on actual theory."

What are the common mistakes you see people make when they attempt this style of playing?

"Sometimes when I see people play in this style they can look very tense, so I think practicing very slowly and getting comfortable with different tempos really helps a lot. As for the technique, sometimes the slap harmonics can be strange and have weird tones. I usually use my middle finger. You don't have to hit it really hard, just a little tap over the fret is enough. And, with the tapping stuff, usually I'll also put my [right] thumb on the guitar neck, as an anchor, because that can help stabilise your hand when you're doing the tapping."

Do you think it's harder to keep people's attention with instrumentals? What's your secret?

"With some people it just doesn't resonate with them at all, but I think if you're going to do it well you need to have good melodic ideas. You really have to cover all bases -you can have cool percussive ideas, but if it doesn't have a nice melody to connect with them, it might be difficult to sit through a two hour show! Sometimes you need to subtract from a riff to add a melody in, but when you're subtracting you need to make sure you're keeping it coherent and keeping the core elements."

YouTube has played a large part in your success. What tips do you have for others trying to do the same thing?

"I don't know. It was weird how it happened for me. There was definitely an element of luck. It seemed like I got on to YouTube early. It was late 2006 when those videos went up, so I guess the timing was good. I was with Candyrat Records and it was totally their idea to shoot them and put them up. They had no idea about marketing, it was just a cool website to put some videos on and they just took off. But I think trying to make other guitar players aware of your music [by sharing videos etc] is always a good thing."

Talk us through your main tour guitars?

"I usually tour with my main Greenfield guitar. It's a standard pitch and it has a fan fretboard [for better intonation] and a couple of bevels for comfort. I'd use that for Drifting, For My Father, Rylynn and Common Ground. I'll go through about 15 different tunings in a night, from DADGAD, ECDGAD, a D6 tuning, or even an F#m11 tuning, which I used on Art Of Motion. Then I got my new Greenfield Baritone about a year ago, which also has the bevels and the fanned frets. On that one I'll do like Ebon Coast, Joyland and Blue Liquid and a new song Mythmaker, from my new EP."

You're also well known for your use of the harp guitar. Could you explain what that is?

"It's been around for hundreds of years. The one I have is based on an early 1900s design and it's got six sub-bass strings, which are lower in pitch and placed above the guitar neck. You can incorporate them in playing with your thumb, or play the harp strings with your right hand and guitar stuff with your left one. I just heard discovered it when I heard Michael Hedges on the album Live on the Double Planet and thought it was an amazing sound. Then I saw a musician named Stephen Bennett playing it live in 1999 and fell in love with it, the options it gives you and the different range."

What else is in your live setup?

"I take a D-Tar Solstice preamp for the guitars, it's pretty basic, but it's very natural-sounding. Then I come out of the guitars with K&K Pure Mini pickups -that's what I have in all of my guitars. It sounds so good for a pickup and that's always the struggle with acoustic guitars - using a pickup and trying to make it sound like an acoustic. I also recently picked up a Boss LoopStation, which I'm going to use for playback of a track from my new album that has piano and electric parts on it. And that's about it!"

Finally, what last inspired you to pick up the guitar and write?

"When my son was born back in September. That was the last thing that was really inspiring to me. Becoming a father has been the greatest thing. It's better than getting to be a touring musician in a lot of ways. I love being a Dad. And that actually resulted in this tune called The Reason, which is on the Mythmaker EP. So that, I guess!"

Andy McKee is touring the UK this month. For tickets and tour dates, visit the official Andy McKee website or connect with Andy on Twitter and Facebook.