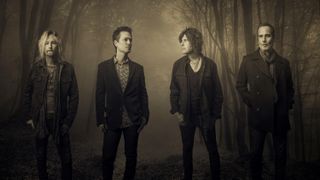 Stone Temple Pilots announced their new album Perdida yesterday along with an unplugged tour. Perdida marks a bold acoustic departure for a band known for their heavyweight riffs as much as their versatility and we spoke to guitarist Dean DeLeo to find out more about what sparked it all.

“It’s something that Robert has been wanting to do for many, many years," Dean tells us of his bassist brother and STP co-writer. "He’s been talking about it for 15 years or more; ‘We need to go and do an acoustic record’".

Perdida marks their second studio release with vocalist Jeff Gutt, who was announced as the band's new frontman in late 2017. And the DeLeo brothers didn't have to look far in providing him inspiration for songs.

As Dean notes, "You have to live it to write it" and the band's eighth album's title is Spanish for 'loss'. But the introspective album is also indicative of a positive new era of creativity and touring for STP as it moves further from the shadows of tragedy in its past.

Dean and Robert DeLeo talk us through their touring rigs

Original vocalist Scott Weiland passed away in 2015, while Linkin Park's Chester Bennington – who later sang with the band and recorded the 2013 EP High Rise with them in – died in 2017.

The band self-produced the 10-song album and were well prepared when they entered drummer Eric Kretz's Bomb Shelter Studio in Los Angeles.

“We got off the road and we jumped right into it and we were really ambitious about it," Dean tells us. "We only had a few weeks, actually a little over a month. A lot of the stuff was already written, I had a lot of ideas sitting around that were like two parts but I knew I had this idea and bringing it to the surface was just basically writing another part or two for it.

"It wasn’t like we went into the studio and went from scratch. The album was [mostly] written and Jeff really got a big jump lyrically and melodically too.

The new musical avenues explored on Perdida will certainly provide a showcase for the DeLeo brother's easily underappreciated versatility as players. But it was an instrumental adventure too.

“It was wonderful," adds Dean. "A lot of the solos are on acoustic guitar. But that’s the beauty of guitar, man, I have so many avenues.

"There’s a photo we took of the bunch of guitars we were using [see above from Robert DeLeo's Instagram] and we had ukuleles to mandolins to 12-string jumbos to Tricone Nationals and these really kooky old Danelectro things that were a battle to get in tune but the sound was so good we had to do it! But it was so fun delving into that side of guitar.”

Perdida will be released on 7 February 2020. The band will play An Evening With Stone Temple Pilots US shows to coincide