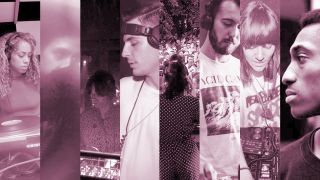 "Hang the blessed DJ, because the music that they constantly play says nothing to me about my life…" While Moz has fallen out of sorts with many of his former legions, his bemoaning aimed at the booth had an odd foreshadowing.

Fast forward to today and DJ culture - and critique - is everywhere. The commodification of inexpensive DJ controllers and the monumental rise of Boiler Room means now, not only is everyone a DJ, but everyone's a critic as well, chateau'd up behind nothing but a keyboard and a dusty screen, layering comment upon comment until they are sure their opinion is heard.

And it's hard to blame those who are hungry and CDJ-ready but sitting on the sidelines, as the fees for those at the top are still astronomical and the number of yearly festivals and punters continues to rise.

Sadly, the effort of building a social media brand seems to be paramount to actual digging for the many wanting to become "professional DJs". Luckily, the art of DJing is still alive and well, and telling a unique story with a carefully-woven string of tracks is still a skill that can bring a massive crowd into a moment of togetherness, regardless of genre, time, or setting.

So with that in mind, here's a list of eight DJs that have impressed us recently, in mixes and on stages, letting their selections do the talking.

It's often tough to pinpoint what exactly makes one DJ's skills shine over another, as we're all presented with the same raw materials: tracks that speak to us and a pair of decks, whatever format they may take.

But the energy in the room picks up a certain kind of magic when you know the DJ is playing music they intimately know and love, and Berlin-via-Vancouver DJ Jayda G (real name Jayda Guy) exhibits just that kind of confidence in spades.

Upcoming gigs around North America and Europe are sure to keep Guy busy into the festival season, and yet she makes time to run Freakout Cult, a recent label venture with DJ Fett Burger that sees Guy dipping her toes into producing tracks that emanate the same warmth as her DJ sets.

Both The Long Count Cycle and Fourth World have been reliable names for catching underground techno in NYC's dwindling club environment for years now, so it's no surprise to know that Good Room resident DJ Scallywag has had a hand in the curation of both monthly events.

Relying on an assortment of both classic techno and newer hardware-oriented tracks from the likes of International Dimensions and Jamal Moss's Mathematics label, Scallywag's tastes skew towards the gritty and raw.

Recent gigs at Brooklyn's Elsewhere, Nowadays, The Good Room, and Bossa Nova Civic Club point to an even busier gig schedule in the coming months, and a career-defining set for last year's Sustain Release festival is sure to continue to be replayed.

Chicago's house roots means the Windy City will always have a slew of DJs ready for prime time, but smartBar resident and Hugo Ball co-curator Sold - real name Glenna Fitch - still stands out among those crowds.

Check the mix for esteemed curator Blowing Up the Workshop for proof, which balances the hazy atmospherics of producers like Pan Daijing and Felicia Atkinson with tracks from hardware house producer Bookworms and a dizzying footwork number from fellow Chicagoan Jana Rush.

Now spinning strictly vinyl as a way to mature her taste, Fitch's confidence grew with the encouragement of fellow SmartBar resident and former talent buyer Marea Stamper, aka The Black Madonna, as well as witnessing female-led classes that showed just how accessible modern tools were to anyone with the inkling to mix.

Recent appearances in Los Angeles for the Black Lodge and mixes for Rinse.FM show a DJ just beginning to hit her stride.

If you were lucky enough to experience one of the "Don't Panic" forest raves right outside Santa Cruz, there's a good chance you heard Mike Gushansky hunched over a pair of decks, playing chunky 90's house tracks and riding long, careful blends.

Gushansky grew up in Los Angeles but briefly resided in the Bay Area, where he honed his DJ skills under Bob Five and became a resident with As You Like It, a regular group of promoters that's been bringing choice selectors from around the globe to both SF and LA since 2010.

Recent mixes for Acid Camp and Dig Deeper LA, as well as a slew of warm-up slots for artists such as Peggy Gou and Move D, show Gushansky's knack for the slow build and his capability at warming up a room to just the right temperature.

Elena Colombi is a stalwart of London online radio station NTS, and her regular show promises to "keep Mondays weird." Selections that span from musique concrete to minimal synthesizer music to post punk to EBM show a DJ with broad, eclectic taste that has the power to harness and fuse these distinct strains with ease.

Colombi was influenced by dub, reggae, and world music while frequently traveling as a child with her parents, skills that are sure to help deal with her growing international calendar of gigs. Recent shows include sharing a bill with Ron Morelli in LA in April, as well as dates in Miami and across Europe this spring.

Evan Baggs is originally from New York, a DJ mecca if there ever was one, though his move to Berlin in 2007 gave his already-nascent mixing skills a chance to develop even further.

Mixing (pun intended) with the minimal set in the German techno mecca landed him high profile gigs at Panorama Bar and Ibiza's the Zoo Project, and mixes for trusted curators like London's Fabric, Resident Advisor, and XLR8R show a style that is deep and classic but still cutting enough to have a contemporary flair.

Baggs has been content to let his mixing do the talking, and with records out on Cabaret and Binh's Time Passages label, it's clear that his production skills speak volumes with just as few words.

Growing up in the burgeoning Tel Aviv club scene, Mor Elian caught the DJ fever from her older siblings, who dragged her to underground drum and bass raves when she was still under age.

The energy of those first gatherings got under Elian's skin, and in order to avoid Israel's mandatory army service, she hopped a plane to the US, first landing in San Francisco before eventually making her way down to Los Angeles in hopes of finding a DJing community.

There, a happenstance gig led her to connect with online radio fixture Dublab, which in turn led to Elian hosting her own show. Plaza 2 Plaza highlights the threads between steely techno and club-ready house, and gave her to try her own hand at producing, which has clearly paid off.

Recent records include 12"s for Radio Matrix, Hypercolour, and her own label, Fever AM, though another move, this time to Berlin, has propelled Elian to an even higher profile, surely still on the rise as this year's festival season gets underway.

While we're accustomed to most clubbing going on after dark (at least here in the states), Aaron Davis took a different approach from the get-go when he founded Acid Camp, a Sunday afternoon party based in Los Angeles with an emphasis on fun and accessibility.

Acid Camp has previously hosted esteemed guests such as Nick Hoepfner and John Tejada, and while the party's taste due tend to be heavy on acid, there's a healthy dose of techno, disco, and house mixed as well.

Now that Acid Camp has expanded with a reliable mix series and it's own record label, Davis has already seen more dates on his calendar, something that will reliably continue as campers find their way to his parties.