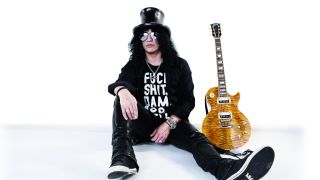 Most famous as the guitarist from Guns N’ Roses, Slash is the most instantly recognisable rock musician in the last 30 years of rock. And his sound is equally striking; add together his expressive playing, instantly-recognizable tone, and his penchant for a rip-roaring solo, and you have yourself one of the greatest guitar heroes of all time.

Here are five essential Slash songs, spanning his work with G’N’R, Velvet Revolver, and as a solo artist, that every guitarist needs to hear. Enjoy!

This Velvet Revolver ballad begins with twinkling embellishments in the guitar part, later reiterated in soaring lead lines and chunky riffs, as Slash establishes his prowess all over this track. His distinctive tone and power ballad writing is clearly evidenced her

As with most of Slash’s best work, it’s the solo that really stands out though. And as with many of his solos, really when deconstructed it’s arguably simply blues licks, in sequence. However, his feel, his tone, his use of bends and legato, and the odd spicy note elevates it to another level and makes this greater than the sum of its parts.

Learn from the master

5 guitar tricks you can learn from Slash

"Slash’s atmospheric arpeggiating certainly adds something new to this much-played, much-covered song, but it’s really his two solos that demonstrate one of the best sides of his soloing here. His playing is ultra-melodic, but without ever being tame.

"His sustain, tone and melody carry the listener through solo one, then solo two lays its intentions out with a big bend running into a sequence of dynamic blues-rock licks, thoroughly elevated by great chord tone awareness – ‘playing the changes’ – that is to say targeted landing on certain notes as the chords underneath change.

"This, like much of Slash’s playing is an example of something fairly straightforward being so well executed in his hands that it becomes something very special."

Something a bit different here, with this chunky, angsty track from Slash’s solo repertoire, featuring Chris Cornell. The rhythm part is well established from the beginning, with a catchy measure that climbs inside your ear and won’t quit.

Layered instrumentation including interacting guitars fill out this main theme throughout, and although the lead guitar displays a sharper tone than the other songs on this list, Slash’s licks and phrasing is well evidenced. As is his use of the harmonic minor scale, something he’s certainly not averse to.

Beginning with another trademark, twinkly, arpeggiated, chorus-laden guitar part, 1987’s ‘Paradise City’ is one of Guns N’ Roses most famous hits. It progresses into a Led Zeppelin style riffage, with choruses sandwiching Slash’s licks and fills that somehow deliver a cross between metal and country!

"Technique can become the main aspiration, but for me, it’s more about expressing some sort of emotional content"

"His tone and energy transpose country-style guitar licks into a hard blues-rock offering, but show a wide underlying palette of influence.

"By the final minute to 90-seconds though, it’s Guns on full stream, with the best of Slash’s high-gain legato in full flow under Axl Rose’s vocal, uniting in a Page and Plant homage for an apparently frenetic, though thoroughly well-orchestrated, ending.

It just has to be on the list. However much the intro has been overplayed by beginner guitarists, to the point that it’s an almost surreal musical snippet, it is a defining Slash moment. However, as inventive as the main riff and its varied iterations in the verse/pre-chorus are, this song’s inclusion is for one reason only; that guitar solo.

Slash: the 10 records that changed my life

It's Slash in a nutshell – melodic, energetic, harmonic minor, wah wah, great tone, chaining phrases to create a journey, leading to ultimately a solo that is thoroughly memorable, sing-able, and not over-indulgent, even at over a minute long.

This solo’s greatness also means there’s plenty here for the intermediate-advanced guitarists too; beginners can progress once they’ve played that intro enough (if that could ever happen)!