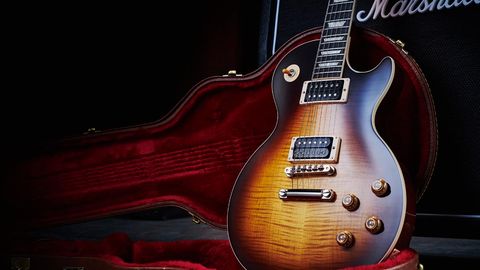 A heavyweight contender for your next favourite Les Paul, and you don't have to be a Slash super-fan to get the best out of it

Every so often you get an electric guitar and a player whose fortunes are inextricably linked. Take the Gibson Les Paul and Slash.

Since emerging from the sleaze of the '80s LA scene and taking an animalistic rock sound worldwide, the Guns N' Roses guitarist is synonymous with the classic singlecut. No one since Jimmy Page has done more to raise its profile – even if the most-famous instrument Slash played during the Appetite For Destruction days was an LP replica made by Kris Derrig and Max Baranet

There have been a number of limited edition Slash Les Pauls – Custom Shop models, premium Epiphone models – but there has never been a production line model until now. Unveiled at NAMM 2020, the Gibson Slash Les Paul Standard comes in four finishes, each referencing a different point in the top-hatted rock icon's storied career.

There is the Appetite Amber model, which has a faded Lemon Drop finish as per his original Derrig/Baranet replica. Then we have the November Burst (which is not unlike a Tobacco Burst), a prominently rouge Vermillion Burst and the green-to-black Anaconda Burst. The latter two finishes are a little off-piste as far as Gibson burst colours go but they look spectacular, but then they are listed as limited editions so if they do tickle your fancy don't hang around.

Ostensibly the guitars are the same. They have AAA flamed maple tops, and the same C-profile neck carve, a paring of Custom Burstbucker Alnico II humbuckers, and  Slash’s “Scully” signature drawing on the rear of the headstock. Oh, and there is signed truss rod cover, too.

A blank truss rod cover is included with the case if you feel the Gibson headstock has only got room for one guitar hero's name.

Our review instrument was the November Burst. As with the others in the series there is no weight relief. Those with sciatica look away now – ours was pushing 4.3kg. But weight is a subjective quality. Some relish it, and comfort is typically only a good choice of strap away. Get a strap that's thick and wide to spread the load.

If the weight is the first thing you notice, the second will be the finish. The quality control has not always been up to snuff at Gibson but the new regime has made it a priority and there is abundant evidence to suggest that this was put together with a lot of love, care and attention to detail.

Slash's Scully logo on the back of the headstock.

As you might expect Slash likes his pickups voiced a little hotter than regular Burstbuckers.

"They are voiced to Slash’s specification based off the pickups he’s been using for many, many years," explains Gibson USA's Jim DeCola. "He’s been touring the past year with the pickups and approved them: they’re the real classic Slash sound. Slash tailored the different pickup bobbin and ring colours, the knobs to what he liked and that’s what we wanted: his input.”

Under the hood you'll find 500k pots and orange drop capacitors on a metal shielding plate.

Slash's signature is emblazoned on the truss rod cover but there is a blank in the case.

Gibson's attention to detail is also evidenced in the guitar's feel. The fretwork and setup are immaculate, so too the pleasingly dark rosewood fingerboard. It's nice to take a guitar out of the case and find the action so easy, with no fret buzz.

As per Slash's preference, the neck carve is a '50s style, C-profile that's somewhere in the medium to fat. It fills the palm nicely, is supremely comfortable, and is very similar to the profiles of the '50s Standard, with a depth of 22mm at the 1st fret and 25.4mm at the 12th.

Upper-fret access is what it is with a Les Paul but it never impeded Slash and nor should it pour water on your ascension into lead guitar nirvana.

• Gibson Les Paul Classic 2019
A heavyweight LP with a raft of usable tones, and a very nice plain maple top.

Indeed, the bridge 'bucker has a little of the cocked wah to its voice. Our reference model is just 3.68kg, so perhaps that has something to do with it, but swapping the pickups around would make for an interesting experiment.

The colour choices are smart. Even the more adventurous finishes don't look out of place. And at this price, for a few dollars more than the main run of Les Paul Standards, these offer good value for money. These are excellent Les Pauls for Les Paul money.

MusicRadar verdict: A heavyweight contender for your next favourite Les Paul, and you don't have to be a Slash super-fan to get the best out of it.

"For a moment we are transported back to that golden era of rock guitar with the visceral, trouser-flapping fury of a Les Paul through a molten tube amp. And it is glorious."
Guitar.com