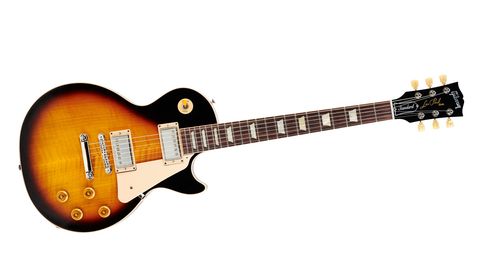 Like the Traditional before it, the Standard ’50s is the obvious choice if you’re chasing a more vintage-y specification.

You might say it’s fitting that 60 years after producing what many believe to be the definitive electric guitar - the 1959 Les Paul Standard - Gibson, now under new management, has given its USA production range a makeover that hopefully signals a return to form.

Plagued by business issues, wavering quality, some would say idiotic features... it’s fair to say Gibson had lost its way. At this year’s NAMM show back in January, however, a reorganised line was premiered that clearly addressed many issues from the old regime.

The new range splits the guitars into two collections, Original and Modern, replacing the previous Traditional and High Performance ranges. The former collection is where you’ll find contemporary versions of guitars that many of us grew up with: the Les Paul Standard, SG, Special, Junior, Flying V and Explorer. Although they’re not vintage reissues, there’s no truck with modernism here. Rightly, however, Gibson has retained many features that have been accepted by players – for example, weight relief and expanded sounds - that now reside in the Modern collection. Here, we see the new Les Paul Modern, for example, alongside existing instruments such as our Les Paul Classic and Tribute, the Studio and the start-up Les Paul Junior Tribute DC. So, let’s dip into ‘new Gibson’.

‘Don’t mess with the standard’ were words that fell on deaf ears in terms of Gibson’s previous management. Thankfully, the new team has listened. Effectively now within the Original Collection, the previous Les Paul Traditional has been split into two and renamed Standard: in 50s and 60s flavours. The guitars are identical in build with one-piece slab sawn mahogany backs (with no weight relief ), quarter-sawn mahogany necks (with short tenons), and mildly figured two-piece centre-joined maple tops.

The major construction difference lies in the neck shape: the ’50s goes for a bigger Vintage ’50s profile. It features original-style ‘Gibson Deluxe’ tuners on the correct 17-degree back-angled headstock (with a slight 16- to 15mm taper). In terms of control knob, the ’50s uses clear amber bonnet types. When it comes to pick-ups, the ’50s packs the Burstbucker 1 (neck) and Burstbucker 2 (bridge) of the previous Traditional.

There are a few minor issues, from rather sharp edges to the (Graph Tech TUSQ) top nuts, very dry and light-coloured fingerboards, and the odd groove in the nut that just needs a couple of strokes of a fret file. Frets fall into a medium size, approximately 2.28mm wide with a height that’s around 1.15mm. It certainly gives all our ’Pauls quite a classic feel. All four are nicely set up with between 1.4mm and 1.5mm string height on the top E, and 1.8mm on the bass side, all with a slight fingerboard relief of 0.152mm (0.006-inch).

Pickup heights are a little more random in places, but nothing that a quick adjustment with a screwdriver doesn’t fix. This guitar is shipped with 0.010s, too (rather than the 0.009 to 0.046 of the previous wave), and overall, it is just slightly tidier and more dialled-in compared with the prior trio we looked at earlier this year.

Many of us get hung up on neck shape, and if ‘big’ is essential to you then the ’50s ticks that box. Listening acoustically is quite revealing. The ’50s has a vibrant if slightly brash voice.There’s a lot of crossover to be found in the new batch of models. There’s no doubt the ’50s is the statelier choice, wrapped in a rich low-end and slightly pulled back on the sizzle.

Things don’t change overnight and this Les Paul doesn’t feel or sound particularly different to any samples we’ve played over the past couple of years. It could do with a little bit of love, as we’ve described, but there’s certainly nothing major. If you’re particular about weight, however, especially if you’re buying online, make sure you ask. As ever, nothing beats trying out a selection in person, especially as in this quartet where, even with subtly different specifications, there’s quite a bit of crossover. Like the Traditional before it, the Standard ’50s is the obvious choice if you’re chasing a more vintage-y specification.