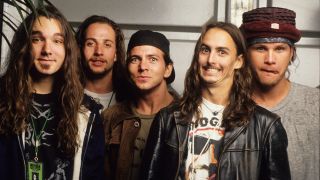 Disclaimer time; this isn’t our pick of the five best Pearl Jam songs, that would be an even harder rundown to create. Instead we’re casting a light on the different facets of guitar approaches that make up one of the greatest rock bands to emerge in the last 30 years. One that has the benefit of all its members as songwriting and three guitar players onstage with Eddie Vedder, Stone Gossard and Mike McCready.

That dynamic of different creative perspectives has made for a rich variety over 11 studio albums as the band lean into their punk rock influences and stretch out into experimental territory. Here then is a great place to start…

It makes sense to begin at the band’s genesis and what for many is Pearl Jam's defining song. The music was written originally written for Mother Love Bone by Stone Gossard and was on the demo tape under the title Dollar Short that the guitarist and bassist Jeff Ament circulated in the hopes of finding a singer for a potential new band following the tragic death of MLB’s vocalist Andy Wood.

That version fades out on a solo by the guitarist that had joined the duo's new endeavour; one Mr Mike McCready. But it hadn’t yet become the show-stopper that would emerge during a later demo session with the late Rick Parashar. And that was the version that ended up being used on debut album Ten.

For the band’s first two albums Gossard would take the lead role in songwriting and his slide into the intro and verse riff here ushers in the sense of open groove that typified his early writing with Ament. But its final two minutes are all McCready as he builds his E minor pentatonic scale and E blues chops into an incredible crescendo. With a little help from a KISS icon…

“Basically, I copied Ace Frehley’s solo from She, ” McCready admitted. “Which, of course, was copied from Robby Krieger’s solo in the Doors’ Five to One.” Regardless, Alive is one of the all-time great rock solos.

As far back as Ten's Porch and Vs's Rearviewmirror Vedder was contributing guitar compositions to the band, but this song showcases a distinct approach that has emerged in more recent times, and reflected on the solo tours he's played.

Vedder's soundtrack for 2007’s Into The Wild showcased the work he’d put into his acoustic fingerstyle technique, and this cut was birthed from the first chord in the instrumental track Toulumne from it. Unashamedly romantic ("as close to a love song as we've ever gotten,” as he said himself) but weighted with lyricism on mortality, Just Breathe uses minimal accompaniment to allow Vedder’s fingerpicking based around C and G chords to shine.

It was reflective of the relative simplicity the band explored on 2009’s Backspacer, that saw them back with hands-on producer Brendan O’ Brien. And it's also a great workout for anyone looking to built their rapid picking dexterity.

Pearl Jam’s conscious withdrawal from the spotlight after their rapid rise to platinum-selling status lead them into unexpectedly experimental places and No Code threw a lot of fans upon its release. Time has shown it to be a landmark in the band’s evolution.

Musically the record is a fascinating selection of textures and approaches, some that evolved from jams but elsewhere saw Vedder fully stepping into the creative driver’s seat with five songs credited solely to him. But it’s this deeper cut and live favourite that is all McCready’s music and typifies the band’s ability to balance the experimental with the anthemic.

Present Tense also smashes any pigeonhole of McCready as just the band’s guitar hero and reveals a deeper side to his writing. And it’s the kind of masterful atmospheric rise and fall approach he’d mine later for songs like Given To Fly and Inside Job. Moreover, Present Tense especially demonstrates the power of less is more when it's in the right dynamic context.

It’s in dropped D tuning for the drone note in the minimalist, calming intro / verse section. Then completely open strings kick in for the first chorus chord to take it up a gear. Things get really interesting immediately after the second chorus where a Bb signals a change in pace, building to a driving edgy chord-based section before taking the song right back into a dreamy place with cascading high arpeggios repeating over the returning verse part. It’s quite a trip.

Pearl Jam have cemented their versatility early on but have never been as thrillingly intense and folky as on second album VS. The former element certainly helped by the wonderfully hard-hitting grooves of drummer Dave Abruzzese (who also wrote the riff to their heaviest song and album opener Go).

Indeed, Go and Animal are one of the great leading combos of any rock album with the second bringing weighty swagger from Gossard’s riff and the chorus’s funk wah before McCready’s most gloriously intense solo to date. It’s the funkier sibling to Ten’s Why Go, but it actually predates that song with a demo of the riff going back to 1990.

Are we at number five already? But we haven’t even mentioned State Of Love And Trust, Immortality, Yellow Ledbetter, Even Flow, Deep, Life Wasted, Of The Girl… you get the picture.

Before streaming lay waste to the physical single, a band could once be judged on the standard of its b-sides, and Pearl Jam’s 2003 Lost Dogs compilation proved the quality of outtakes that didn’t even make it that far. But this unabashed homage to McCready’s hero Hendrix ­thankfully landed on the flipside to Jeremy back in 1992.

It’s a bit of an anomaly in the huge PJ catalogue – there really is nothing else like it, and perhaps that’s why it is loved enough by fan’s to become a PJ set closer for years. That and it's hallmark of  an absolutely stunning blues song.

McCready’s classic Strat tone and earworm clean Jimi-worthy lick take the spotlight beside a wistful Vedder, his lyrics opaque and poetic. The solo is second only Alive in the McCready roll-call, back in that E minor scale and perfectly pitched succinct expression where others would milk it for a few more bars and lose the moment.