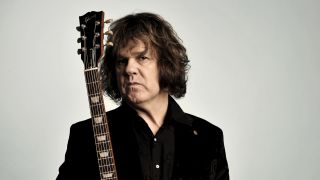 Gary Moore’s unexpected passing in 2011 aged just 58 robbed the world of a phenomenal player and a potent musical force. Wholly uncompromising in both his focus and approach to technique, he turned his hand to a number of styles before ultimately realising his dream; the transformation into a genuine blues legend.

Whether blues, funk, pop rock, shred, or out-and-out hair metal, Moore’s output not only contains some incredible guitarwork but there’s also some accomplished songwriting on offer and if you’re not sure where to start with his bulging discography, try these five on for size.

With American AOR ruling both the charts and the arenas of the world at the time, Moore was well aware of the need for a juicy hit single in the same vein. Such were his writing skills that he came pretty close with this absolute gem and it’s a real shame that it barely made a dent in either the charts or the public’s awareness.

Ushered in by a mournful piano soaked in reverb, Moore’s vocals are heartfelt and the lyrics relatable, while the slabs of guitar underpinning the colossal choruses put the likes of Journey’s Neal Schon and REO Speedwagon’s Gary Richrath to shame. After an ear-snagging hook comes the inevitably monstrous guitar solo, the feel and dexterity of which leaves even those talented contemporaries from across the pond in the dirt.

The accompanying video, featuring a recently-shorn Moore backed by Whitesnake’s contemporaneous rhythm section all gamely flailing away in an outbuilding somewhere, lacks the polish that may well have assisted its success in the bright, new age of MTV. A broken string halfway through the solo section pretty much sums proceedings up but it’s an excellent song nonetheless.

Having previously left Thin Lizzy well and truly in the lurch, bailing for the final time halfway through an American tour, you’d think that the band’s mainman Phillip Lynott wouldn’t ever wish to be in the same room as his nemesis again. However, needs must as the devil drives and, with both Lynott and Moore desperate to rekindle their careers, they teamed up to produce a classic.

The Irishmen trades lead vocal lines - Lynott’s are slinky and malevolent, while Moore’s head high range  - and we can safely assume that the lyrics, poignantly addressing the troubles in Northern Ireland, were of particular significance.

Unmistakably eighties in places, Moore gets good use from his whammy bar and the solo is a lesson in restraint, holding out for as long as he can before releasing the tension with a fast-as-light run that encompasses the entire length of the neck.

Sadly Lynott succumbed to a crippling heroin addiction mere months after the song’s release and it’s a suitable, albeit bittersweet, last hurrah for one of Ireland’s greatest musical exports.

Although this became an out-and-out anthem for Moore throughout the rest of his career, the album version is characterised by co-writer Lynott’s smoky lead vocals, one of the few musicians with the charisma to restrict the guitarist to glowering in the background.

The arrangement became more guitar-centric over the years but this his first single remains one of his most successful releases. Perhaps illustrative of Moore’s mindset, it’s said that the involvement of his old sparring partner sullied the achievement but it’s certainly the song for which he’s best known.

In the video we’ve chosen above, watch the control he exerts during the iconic sustained high E. Adding his customary level of vigorous finger vibrato could have led to the note losing purchase so notice how he moves his wrist ever so gently to give it the movement it needs. It’s a sublime piece of technique and provides just an inkling of what’s required to even stand in his shadow.

That moment of sustain became a firm fan favourite and a highlight of any Gary Moore show. As he told Gibson.com: “There used to be these two guys who’d sit there every night and time the note with a stopwatch. I’d come out and they’d say, ‘Well, Gary, you went for one minute and twenty-seven seconds tonight. Are you going to go for the full two minutes tomorrow?’”

With the eighties just around the corner and years of relentless touring behind them, the impact of this landmark album had brought Lizzy to the brink of true greatness; what could possibly go wrong?

Bluntly, Gary Moore, who upped sticks and quit after a show in Chicago in August 1979, ruining the band’s reputation and thus scuppering their chances of ever cracking America.

Today, however, the dramas pale into insignificance in the face of tracks as good as this and the whole of Black Rose drips with class, its running order also including the beautifully soppy ballad Sarah, the epic title track Roisin Dubh, and the diamond-edged Waiting For An Alibi that boasts a trademark solo from Scott Gorham.

It’s a pity that there’s not more music out there that features Moore trading licks with Lizzy’s Californian guitarist as the twin lines that provide the backbone here are incredible. Perfectly in sync and in tune, and absolutely to the point; even the speeds of their vibratos are matched.

“He felt terrible, subsequently, at what he had done,” Moore’s keyboard player Don Airey told Classic Rock in 2014. “But he felt he had no choice. I think he thought Phil was a goner, and he was right, eventually.”

“I don’t wanna play like that anymore. Widdle, widdle, widdle, up and down the neck as fast as possible. It’s a load of bollocks!’” Moore told original Lizzy guitarist Eric Bell in 1989 and with those words he motivated himself to make the album he’d been born to do.

It’s a proper guitarist’s album too, one that’s full of tones, tricks and technique, and not just from Gazza; Alberts Collins and King also add their not inconsiderable talents to the brew and there’s something here to enjoy for everybody.

5 guitar tricks you can learn from Gary Moore

On the face of it the title track may tick a number of the same boxes as Parisienne Walkways – a fat tone, lilting vocals and a clean arpeggiated guitar under the verse are all shared touchstones – but it’s reached another level of reverence simply because Moore plays so passionately throughout; you can tell he really means it.

After rescuing himself from the self-imposed shackles of the search for a commercial hit during which time he felt he needed to be, as he put it, "…all dolled up like some guy in Def Leppard…", he’d found the way to his wheelhouse and didn’t waste a single note once he got there.

The guitar sound he obtained during the song, both on record and onstage, is a byword for the marriage of a great Les Paul with a straight up-and-down Marshall amp and though many have tried few have managed to fully emulate its molten gloriousness.

Moore was always inspiring, and that he’s longer with us remains a tragedy.