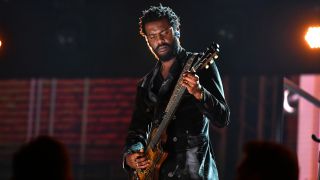 Gary Clark Jr could very well be the most important blues musician walking the earth right now. Of course there are many of the old legends, which the Texan himself took influence from, still around – but looking at the future of blues music, it’s very much down to someone like Clark Jr to keep it alive in the mainstream.

As we all know, there is no shortage of blues virtuosos out there in the world, but few possess the same knack for crossing genres and writing hits that leap out of the underground and into the mainstream. Ask the man himself, however, and you’ll find someone far too humble to accept any crown as the saviour of a genre…

“I don’t think blues is in need of anything,” he told Total Guitar in 2015. “Blues can stand on its own, it’s the root and foundation. You can’t have any vegetation without roots. It sounds dumb, but what’s a car to me if I just keep it parked on the street? Or driving backwards, that’s no fun…

“Go forwards and see how far it goes. I don’t ever wanna stay stuck. I would be playing myself if I walked around pretending to be some straight-up blues guy saying ‘I used to kick it with Muddy Waters!’

“I’m just being true to who I am and I love all kinds of music so naturally being aware that, I absorb sounds like a sponge. You soak it up and ring it out to see what happens. There’s a lot of stuff I’ve been exposed to.”

The title track from Clark Jr.’s last full-length, which scooped three out of the four awards it was nominated for at this year’s Grammys, could very well be the most important track he’s ever written.

Musically, it’s a cocktail of blues, hip-hop, reggae and soul – bold in ambition and executed flawlessly. And yet it’s the overwhelming sense of rawness that makes his leads so powerful, shaking pentatonic notes in E flat until they fade out with all the noises and string rattles kept in.

Then there’s also the message and story behind the song, voicing the concerns of a divided nation and his own experiences of racism, elements which make this one of the most remarkable musical statements of his career to date.

A year and a few months on from release, his sentiments echo even louder.

Paying tribute to darker blues that soundtracked his life in a storm of screeching guitars, teeth-shattering feedback and earthy grooves, Grinder is the kind of song that puts the listener right on the front row of a smoky basement club, where jam nights disappear into the morning.

There’s a note he holds right near the beginning of his first solo that rings out for almost three bars and to great effect, demanding your attention as hairs stand on-end. And those powerful screams and unison bends continue to reappear throughout the song from thereon.

Speaking to this writer for a Total Guitar feature around its release, the modern blues maverick explained the recordings involved “a lot of my normal gear, a Vibro-King combo and a Princeton” as well as using mic placement and room sounds to create space. As he explained at the time, “ambience had more to do with the overall tone than, say, gear.”

Though Gary Clark Jr.’s connection to the blues has remained a constant in his musical evolution, this deep cut from his second major label full-length sounds more like the fuzzy stoner rock associated with bands like Queens Of The Stone Age. There’s almost no high-end at all in his earth-shaking rhythm guitars, which contrast well against the spikier wah-effected lead lines.

“I sit in my room and if I hear something in my head, I try to interpret it the best way I know how to, with the right instrumentation,” he explained to TG.

“I don’t want to force anything. But at the same time, I might switch up and come at you with some rockers, or a jazz album. I don’t know! I listen to all kinds of stuff, from classical to you name it!”

From the opening bends that snake their way around a bluesy shuffle to the reverb-soaked, screaming leads that close its five and a half minutes, Bright Lights is one of many highlights on the Texan singer/songwriter’s major label debut.

5 guitar tricks you can learn from Gary Clark Jr

Slowly bending the fourth interval into the fifth during the intro and first chorus of its A-minor shuffle is one of the tools employed to create tension, slipping into and through flat five along the way – a sound which as we all know lies at the heart of many a great blues recording.

The combination of his Analog Man fuzz and overdrive is what makes his guitar sound electrifying – roaring with every strike and sizzling in between almost as if his amp has caught on fire. It’s this same flair for danger and intensity that’s cemented his stature as a true modern great.

While the falsetto vocals heard on this midway track off Clark Jr.’s newest offering are certainly reminiscent of Prince at points, musically it packs a few twists that range from walking blues and reggae to a busy chorus that has an almost avant-garde jazz and esoteric rock type of feel.

The short staccato lead phrases that reinforce the lyrics during the chorus and solo sections exemplify why the Texan’s leads often sound so vocal, using rhythmic division and dynamics to make his guitar ‘speak’ almost conversationally.

Unpredictable and diverse, it’s a song that demonstrates just how wide a sonic net the singer/guitarist works within and his aptitude for left-hand paths, cross-pollinating vintage sounds with contemporary broadmindedness.