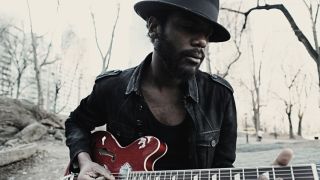 "I felt a little bit of pressure during the recording," says Gary Clark Jr. of his upcoming debut album, Blak And Blu. "But I tried not to pay too much attention to what was going on. When I did the EP, I went in and did what I was feeling, so that's how I tried to keep myself for the album. Just do what I'm feeling - it was like my mantra."

No doubt Clark will have to repeat those words a great deal during the next year, as Blak And Blu makes good on the promise of 2011's Bright Lights EP and firmly establishes the Austin-based guitar ace as a versatile and boldly original artist who blends blues, soul, rock and feedback-driven garage punk into a seamless whole.

Accolades have been tossed on Clark's shoulders like so much confetti, with journalists and blues aficionados falling over themselves to anoint the guitarist-singer and songwriter as the next Hendrix, the next Stevie Ray, the next fill-in-the-blank. Clark, who co-helmed Blak And Blu with producers Rob Cavallo (Green Day, My Chemical Romance) and Mike Elizondo (Mastodon, Dr. Dre, Fiona Apple), shrewdly sidesteps the hubbub by presenting a collection that dares to play to no one crowd. And while he does provide plenty of astonishing six-string fireworks, the most surprising thing about Blak And Blu is the effectiveness of his his sweet, soulful singing voice. Clearly, this is no one-trick pony we're dealing with.

Clark sat down with MusicRadar recently to talk about the recording of Black And Blu, the media frenzy and how he's handling it, his love of Epiphone Casinos and a brand-new guitar purchase that's ringing his bells, and how he decided to pay homage to Hendrix by turning the legend's Third Stone From The Sun upside-down.

When we last spoke, you told me how you wanted a cherry red Casino after seeing pictures of Tito Jackson with a red guitar. Have you met Tito yet?

You started the record with Rob Cavallo, but Mike Elizondo came in to do other tracks with you. How did that come about?

"Mike's name came up as one of the potential producers on the record. I was familiar with him from stuff he did with Doyle Bramhall II and Dr. Dre. So we got together, started talking music and stuff we liked. We hit if off. Then we went into the studio and made some noise. It was a cool process. Mike's a good guy, man. He's very creative, got some good ideas."

Neither Rob nor Mike are what I would call blues purists, but then you're kind of on the fringe of the blues world yourself. Where did you all meet when it comes to the blues?

"I came to these guys with all of my ideas, and they were kind of all over the place. We got together and tried to find some kind of common ground. I came to the conclusion that Mike would be better for stuff that was more blues and R&B-ish, and I'd get with Rob to knock out stuff that was louder and more wild, more guitar driven and crazy. That's how we worked it. It sort of developed that way.

"As for the blues thing… I don't really try to stay inside any kind of box, you know what I mean? I like to stretch things out. I love music - all kinds of music - and I love the blues. Blues is a huge part of what I do. I'm interested in learning and playing, expressing myself with no filter and no rules. I kind of approach everything like that."

Did Mike and Rob work together in any way with you? What was the process in the studio?

"I worked with Rob on certain things, and I worked with Mike on certain songs. It was all real smooth. Both guys brought their own kind of energy into what we were doing. I had most of the songs worked out before we went in. I had recorded demos at my house. The ideas were pretty fleshed out.

"Once I was in the studio with Rob or Mike, that's when they'd help me with arrangements - what to add, what to take away. And then we'd take the songs to the band and change them around in the way. It was kind of all over the place the way that things evolved.

"The main thing was not to overwork an idea. We'd try to get a basic take down and figure out any layers that were needed. Capturing some of the live show feel was pretty important. I didn't want things to sound like I couldn't play them at shows."

It doesn't sound as though you did an inordinate amount of overdubs. The songs do have an authentic live feel.

"Yeah, getting that foundation was the big thing. We did play with stuff sonically, so whatever cool flavors popped into my head, we were going to go for it. I like experimenting." [Laughs]

Were the Casinos your main guitars on the album? You've got the cherry red one from Korea and the pair of Elitist Casinos…

"Yeah, I used the cherry red one on a good portion of the record, and I also used a 335. It was in the studio, and I couldn't resist. [Laughs] But those were the main ones, really. I didn't go crazy with playing all these different guitars. I wanted to concentrate on the songs and the performances."

"I did try a few thing out. I used Princeton amps, Marshalls, all kinds of things. Mike Elizondo has a bunch of different amps. God, he was plugging me in with the 335 into all kinds of amps. We'd try a few out until I'd say, 'Yeah, that's cool.' I'm sure it was a little more involved than that."

Do you have a dream guitar that you have yet to acquire, or is one of your Casinos just that?

"I think I got my dream guitar. It's a '67 Gibson 330. I'm way into that instrument. I got it at Rivington Guitars in New York, just shopping around. It's a fairly new purchase, so I didn't get a chance to use it on the album. I still haven't decided if I'm going to play it live. It might be one of those things I keep to myself." [Laughs]

Let's talk about some of the songs. The first cut, Ain't Messin 'Round, took me by surprise right away.

It's definitely got a classic Motown pop sound.

"That's the first kind of music I heard as a kid. It just came out of me. I've always been into Motown and Stax, R&B vocal groups and stuff like that. I love harmonies and great singers - Otis Redding, Curtis Mayfield. All of that made a huge impact on me."

"Hollowbodies act so differently than other types of guitars," says Clark. "that's why I like them." © Frank Maddocks

When My Train Pulls In has a riff that's reminiscent of Peter Green on Oh Well.

"Really? Hmm… Yeah, it's a droning guitar riff in the minor key of E. I can hear that. That kind of sound always appealed to me. I just kind of went with it."

Last year, you said that you were still "experimenting" with feedback. I'd say you accomplished some great things with it on this song.

[Laughs] "Thanks. Yeah, that's the good ol' Casino. It's a pretty wild guitar. I definitely took advantage of how it reacts and what it likes to do. Sometimes it speaks for itself. It's cool when you just let it do what it wants. Hollowbodies act so differently than other types of guitars - that's why I like them."

The title track, Blak And Blu, is a pretty cool mix of styles. There's a bit of Prince R&B with an overall feel that recalls classic Marvin Gaye.

"Hmm... that's interesting. Wow, what can I say? Marvin Gaye, sure, I've definitely listened to a lot of his albums over the years. The song is a little bit different. On this album, I wanted to put it all out there. I've got the live show thing - I do the lowdown and nasty, guitar-driven sound. But I had that song lying around, and I didn't know what to do with it, so I decided to record it and show a different side to me and what I do."

"'Garage punk!' [Laughs] Thanks. I put the guitar down in open D and kind of got lost in that. I love stuff like that. It's wild. I don't know about any conscious influences or anything like that. I mean, I've definitely listened to that kind of music.

OK, we have to talk about your mix of If You Love Me Like You Say and Third Stone From The Sun. Where did you get the idea to put them together?

"You know, those are two of my favorite songs. I got into them when I started playing blues and rock 'n' roll and stuff like that. That came from playing with the band early on. We had this gig every Monday where we had to play for four hours, from ten at night to two in the morning. It got to that point where we were like, 'What do you want to do?'… 'I don't know, what do you want to do?' People were adjusting their equipment, and I started playing this thing in E. I just went into that riff - I couldn't tell you why - but it developed into the kind of jam I'd been doing. We all clicked and jumped into it, and I started singing the song."

It's not an exact cover of Third Stone. You kind of take the riff as a lift-off point for something else.

"Yeah. I wanted to give a nod to the folks I respect and am very influenced by without trying to copy their songs. Trying to capture what they did but do it in my own way… that's what I was going for."

Did the idea of covering Hendrix give you any pause for thought? To avoid comparisons, did you ever say to yourself, "Maybe I shouldn't go there?"

[Long pause] "Yeah… I thought about it. But it's one of my favorite songs, and I love playing it, so I couldn't help myself. That's all I can really say about it."

The last couple of years have been pretty incredible for you. The amount of gushing press you received for the EP, did it ever feel like too much too soon?

"It's been a wild ride lately. I've been to a lot of places I've never been before. Seeing people getting into my songs and singing along to them, it's something you think about, but when it actually happens, it's a trip. I'm grateful. And it's… yeah, it's been overwhelming. But as far as pressure or anything… I know what you mean there. I'm just doing what I'm doing, and people are digging it."