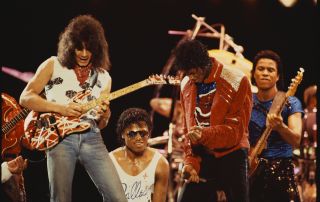 When Van Halen’s debut album hit in 1978 rock was under fire. With its foundations being eroded by punk, new wave and disco, the latter part of the furniture in the US at the time, the stadium-filling rock acts of the day were either crumbling under the bloated weight of their excesses or were giving up completely.

When VH burst out of suburban Pasadena in 1976, the antics of Edward Van Halen and showmanship of kinetic frontman David Lee Roth were not only a breath of fresh air but also a call to arms and after years honing their craft in LA, the band took flight.

Don’t be distracted by the razzmatazz, though; EVH is up there with the likes of Hendrix, Marvin and Cochran as one of humanity’s pivotal guitarists and it’s impossible to understate the influence he’s had on rock players past and present.

Nobody could work out how he was conjuring the sounds he was or why the music was just so damn good, and if there’s anyone to blame for the myriad big-haired bands that crawled out of LA and elsewhere during the early eighties, some of them good, others utterly risible, it’s Eddie Van Halen.

Here's five reasons why the original will always be the best.

Every track on Van Halen’s debut is a feast of consummate musicality, but for sheer brash attitude and extraordinary technical skill I’m The One takes the biscuit. Rarely mentioned alongside the likes of You Really Got Me and, of course, Eruption it features so many tricks that it’s difficult to know where to begin its dissection but the truth is that, at the time, nobody had heard anything like it especially within the constraints of a straight-ahead hard rock song.

The divebombs, hammer-ons, speed-of-light runs and impossible intervals just keep coming before, of all things, a bebop-style close harmony vocal break slams on the brakes. Inspired.

On Halen’s 1978 world tour, much of it in propping up a disintegrating Never Say Die-era Black Sabbath, this track was second on the setlist and we can only imagine its impact on the unsuspecting audiences. Even by today’s standards it has to be some of the most incredible rock guitar ever recorded.

The period surrounding VH’s fourth album is one of dissatisfaction and internal friction, which may well explain not only its criminally sort running time, but also the dark vibes sewn through what music there is. Fair Warning certainly doesn’t offer much in the way of out and out fun even though it remains something of a purist’s favourite.

6 guitar tricks you can learn from Eddie Van Halen

Mean Street, and thus the album itself, opens with Ed slapping the guitar much like a funk bassist might, rhythmically hitting octaves and harmonics with his thumb and index finger before what must be the most majestic open G chord in rock drops through the ceiling: if you’re still unsure just what Ed’s lauded ‘Brown Sound’ is, this is it.

Produced by feeding a reduced voltage into a late sixties Marshall Super Lead head and running it absolutely flat out, it truly is wonderful sound and although Ed has always had a great tone it has never been captured so efficiently.

Probably the best known factoid regarding this collaboration with the King of Pop is that Ed didn’t get paid for his time, the session undertaken as a favour to producer Quincy Jones instead.

Building upon a faultless base track that had been laid down by most of Toto (Steve Lukather plays all guitar on Beat It save the solo), Ed, given a free rein, mesmerised Jacko’s pop audience in much the same way as he had the late seventies LA rock crowd by combining two improvised takes full of flash and fire into one great lead break.

Ed told CNN in 2012: "I said to myself, 'Who’s going to know that I played on this kid's record? Nobody's going to find out’. It ended up being record of the year." For his part a possibly envious Roth simply sniffed to Rolling Stone: “What did Edward do with Michael Jackson? He played the same solo he's been playing in this band for 10 years. Big deal."

Ironically Thriller went on to keep VH’s album 1984 off the top of the American charts, which probably didn’t do much to soothe any underlying resentment.

And yes, they did play it together live…

By the mid eighties the cracks that had started to appear in the band’s bonhomie were widening to chasms as Roth loudly resisted Eddie’s increasing desire broaden their horizons by sprinkling keyboards into the mix.

While the global success of the album’s 10 million-selling single Jump suggests that Ed knew exactly what he was doing, Hot For Teacher is arguably the last great out-and-out rocker from the band’s classic line up.

How to play the Van Halen 'Hot For Teacher' drum intro

Alex Van Halen’s clattering drums herald a two-handed tapping guitar that segues into Roth holding courting at the back of the class, idly – and hilariously - imagining how the titular educator will be attired upon her imminent arrival.

With Roth ramping up the humour and Ed pulling out a lengthy solo that ticks every box of his technique this is eighties Van Halen at their most pure, the likes of which we’ll surely never see again. The gloriously un-PC promo video is a hoot too and guitar stores across the land still echo to the sound of inexpert fingers shamelessly fudging that iconic intro. Class dismissed!

Eruption is possibly the most influential piece of solo rock guitar ever recorded and although the familiarity we have with its twists and turns now unavoidably leads some of us to take it for granted, back in 1978 it was all the band could do to persuade critics and fans alike that this was a guitar they were hearing, not a keyboard.

Committed to tape on 8 September 1977 and based on a set piece Ed had been playing for a couple of years it was put together from two off-the-cuff takes and, at a stroke, altered the way rock players approached the electric guitar forever.

The truth is that, prior to Eruption virtually no-one was using their picking hand to tap notes on the fretboard; afterwards, everyone was. See? All his fault.