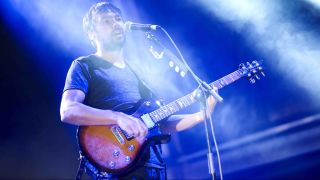 Over nearly two decades of hard graft, The Pineapple Thief have established themselves as nouveau prog darlings, with guitarist and frontman Bruce Soord masterminding the group’s songwriting and direction.

While he readies his rig, Bruce found time to take on the venerable 10 questions format, dishing the dirt on his priceless gear, picking woes and why The Pineapple Thief should never follow party bands…

“It was a sparkly purple Marlin Sidewinder. I think they were the first true ultra-budget (aka shit) electric guitars? Anyway, at the time, I thought it was the greatest thing in the world. I think Mike Vennart actually has a Sidewinder bridge on his current guitar, so maybe it wasn’t so bad...”

“That would be my mate’s Strat, which I’ve had on loan for so long, it’s now mine by default. It’s a 2006 USA Deluxe Strat. Seymour Duncan JB (bridge) and SD '59 (neck) and just plays and sounds like nothing else I have ever touched. It’s one of those ‘one-off’ guitars that got blessed in the factory.”

“If my rig blew up and I had to plug in with just one pedal? OCD. That thing can do pretty much everything and sounds so lush.”

“I had a Mesa Boogie MkIII that I sold when I was skint. I miss having an amp, and that little thing was a monster. I’m a Kemper boy now, but I do miss feeling the power of a valve amp behind me.”

“A minor. I can strum that all day. It’s just the perfectly placed chord for a guitar.”

“My picking technique is bloody terrible because I was self-taught. It makes me work twice as hard to do the more technically demanding stuff. It feels too late to learn a new golf swing now, but I am actually trying!”

“Darran Charles from Godsticks, who also plays with us live. He has absolutely no patience with me. Calls me lazy and arrogant (because I never practise). If he was forced to sit down with me and give me a lesson I reckon he would spontaneously combust.”

Me and my guitar: Bruce Soord, The Pineapple Thief

“In our early days, our agent somehow got us a decent slot at a German mainstream festival. Before us was a party rock band, getting the crowd whipped up into a drunken frenzy: “Now all the girls!” etc etc.

“So we go on with our melancholic prog-rock, and as you can imagine, it bombed. Then we lost our click track, went out of time and collectively fell on our arses. All hell broke loose, shit flying on stage from all angles. We couldn’t get out of there fast enough.”

“Get your technique right from the get-go.”