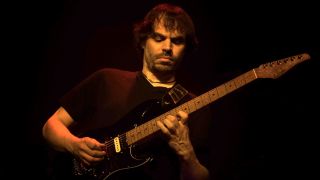 If you have a hankering for big riffs and even bigger solos, look no further than South Wales' own Godsticks.

Led by six- and seven-string-savvy guitarist Darran Charles, the power trio weave contemporary prog and 90s-inspired riffery into a rock cocktail so potent it's landed them support slots with such guitar heavyweights as Mike Keneally and The Aristocrats.

Following the release of new album Emergence, we hit Mr Charles with our infallible 10 questions, whereupon he duly dished the dirt on irreplaceable guitars, onstage mistakes and his unusual choice of desert island gear…

"I can't remember the make, but it was definitely a Strat copy: a black one with a maple neck, if my memory serves me right.

"I think I was probably about 10 or 11 at the time, and my father bought it for me at a local secondhand shop. It wasn't a great guitar, and sounded as bad as it played."

"I'd say that all my guitars are replaceable to some degree, but the one that I'd probably find the most difficult would be my Fender US Deluxe Strat. I use this guitar for all album solos, and also loan it to a couple of my musician friends when they're recording their albums.

"It's been the victim of a very poor setup job that has accidentally resulted in the frets being pared down to a very shallow height. But that, along with a great many other intangibles like wood density and a very dark rosewood 'board, has given it a very unique sound and wonderful, singing tone."

"Not really, only because I very rarely sell anything, as my cluttered household would no doubt testify. I had a black Ibanez RG570 that I grew up playing but sold on once I fell in love with Fender Strats in my mid-20s. I probably wish I'd kept hold of that, but only for sentimental reasons."

"For recording purposes I'm determined to own all of the 'classic' shapes, so probably a Gretsch of some sort. Or maybe something with P-90s."

"I don't consider myself proficient at anything, to be honest, so my answer would probably be 'everything'. I'd like to develop my improvisational skills a lot more."

"Drinking a cup of coffee, then looking for some water for the stage. Boring, I know!"

"If I'm on tour, then I usually go back to the dressing room and begin obsessively going over any mistakes that I may have made during the gig.

"I control my obsessiveness a little better these days, though, thankfully, and I just try to enjoy my time onstage without worrying too much about silly things. Rehearsing hard helps with this."

"I'd probably take a guitar with a heavy-gauge set of strings just so that I could confidently use them to hang myself from the nearest tree. Without all the creature comforts, I just ain't interested!"

"I've been pretty lucky, to be honest. The worst thing that's happened was when, after locking my Tremol-No - a device that locks floating trems so that they act like a fixed bridge - for a particular song in drop D, I mistakenly began to use the vibrato bar during the solo, which resulted in the 'fixed' bridge moving to a completely different position, and consequently, a completely different - and random - tuning.

"I'm counting myself lucky that I can cite this as the worst experience I've had, however!"

"That's a difficult one. I still make the same mistakes practising as I always have, and I think your personality helps shape the player you eventually become.

"I'd probably tell myself to join a band a lot sooner, rather than waiting to emerge a fully formed guitar player before hooking up with other musicians - I discovered that day never comes!"

Godsticks' new album, Emergence, is out now - head over to the band's website for more.