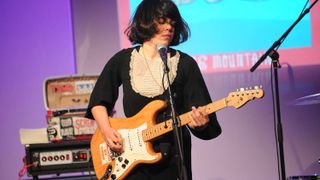 A double-LP isn't necessarily something you'd expect from a band of indie-punks, but Screaming Females have never been ones to play by the rules, as evidenced on sprawling new album All At Once.

Ahead of the album’s release, we got Marissa’s thoughts on the guitars and pedals that power the band’s outspoken sonic approach, and the life and gear lessons she’s learned over the years…

“My first guitar was a Fender Musicmaster. It's actually my father’s, but that's the first one I played regularly.”

“I would absolutely save my G&L S-500 that was graciously given to me by a cousin when I was 16. It's probably the only possession of mine I would mourn the loss of.”

“I rely very heavily on a Boss DD-6 Digital Delay, because I like the warp function on it. It operates like a sustain pedal, but holds the delay signal indefinitely until you remove your foot. It adds a lot of texture to our live performance and is fun to improvise with.”

“I'm pretty happy with what I have. I don’t often seek out gear. I haven't the budget nor the space to have a lot of things.”

“D! Always D! D major always sounded triumphant to me. I'm trying to steer clear of that one, though... I might be moving onto A minor in my older age.”

“Sure, I mean, I'd like to be better at all of it! I'd really like to be more adept at fingerpicking, but I don't often have time to sit down with an acoustic guitar.”

“John Fahey! Because he probably would teach me one amazing thing, smoke a pack of cigarettes, and then we'd just hang out and drink beer.”

“I used to have total nervous breakdowns on stage when my equipment shit the bed. After playing 1,000+ shows, I've come to terms that gear breaking is just par for the course and to remain calm.”

All At Once is out on 23 February via Don Giovanni Records.