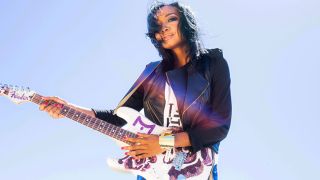 Wielding a reverse-strung Strat left-handed guitar, Malina Moye may instantly recall Hendrix - and indeed, she delivers her own searing version of Jimi’s classic Foxxy Lady - but her blend of pop, funk, soul and blues is all her own.

As she celebrates the release of groove-heavy new album Bad As I Wanna Be, which recently peaked at number 2 on the Billboard blues chart, we caught up with Moye to hear about her priceless guitars and why you should never overlook that all-important volume control…

“A Gibson Melody Maker. It was my dad’s guitar.”

“Man, only one? My custom Fender with the sea foam left-handed body with a right-handed headstock strung in reverse. It’s got DiMarzio pickups in the neck and bridge (True Velvet and Virtual Vintage Blues).”

“My Boss Metal Zone. It's got a nice rich tone with my Fender Hot Rod DeVille 212 amp.”

“Another axe in my custom configuration, but with a Floyd Rose tremolo system in shell pink and gold trim. BOOM!”

“The dominant 7th chord: it's so funky and it rings.”

“Jimi Hendrix. It seems like he would explain it to me like I'm three years old and I'll see it directly from him.”

“Haaaaaaa! It was on a national TV show. It was my one moment and the guitar sound wasn't coming out. I forgot to do one thing - turn up the volume! [laughs]”

“Have fun, stay outside the box and don't be afraid to experiment with more unstructured chords.”

Bad As I Wanna Be is out now via WCE Records.