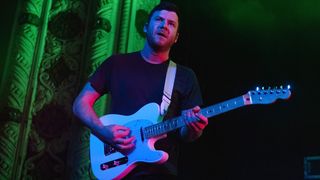 Electro-rockers Enter Shikari had a storming 2017, with politically charged new album The Spark landing them a top 5 spot in the UK charts, followed up with a massive arena tour.

This year, the band capitalises on their continued success with a run of European summer festivals, including a headline slot at 2000 Trees in July.

As guitarist Rory Clewlow readies his rig, we quizzed him on his prized guitars, how the Kemper Profiler has revolutionised his rig and an expensive onstage dental disaster…

“The first guitar I owned was a Yamaha Pacifica. It was my dad’s really, but it’s the one I learned to play on and even played the first few Shikari shows with it. I must have got that guitar about 16 years ago.”

“Probably my newest guitar, actually - it’s a Fender Telecaster American Pro. I got the body sprayed off-white and got a transparent aqua scratchplate, and got an EverTune bridge installed. I would be sad to lose my older guitars in the fire, but not too much; I’m not hugely sentimental.”

“I haven’t used any effects pedals in the past few years, actually. I use a Kemper Profiler amp and it has a ton of effects built in. I control them with pre-programmed MIDI messages from Ableton. I really love not having a pedalboard on stage any more. I don’t have to think about tap-dancing all over it to change tones and effects. I can just concentrate on playing.”

“Probably my very first practice amp. It was a little Peavey thing but I can’t remember what the model was. I used to think it sounded amazing. Would like to hear that again.”

“I’d really like a proper vintage Tele. One of those ones that barks at you when you hit the strings.”

“Well, in my opinion, no-one can make a guitar sound better than Tom Morello.”

8. If you could have a guitar lesson from one guitarist, dead or alive, who would it be?

“About eight years ago, a crowd surfer fell into my mic stand and the mic flew into my face and broke one of my front teeth. That sucked. Dental work ain’t cheap!”