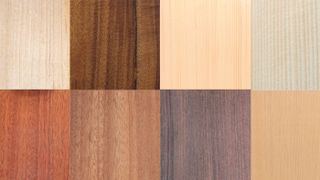 Native to North America and Canada this is the most common wood for acoustic tops. It offers a good mix of strength, clarity and dynamic range over a variety of styles and looks. German and Engelmann spruce varieties are less common and exhibit similar tonal qualities. German spruce is popular for classical and Engelmann is regarded as an upgrade to Sitka, for its lightness and richness.

This is often found on premium models as a top wood (it’s rather expensive) but Taylor Guitars founder Bob Taylor claims that if it’s used on bracing alone with a Sitka spruce top you’ll still get 80 percent of the benefit. Another North American and Canadian wood, the springy qualities of adirondack means that it loves to be driven hard and still delivers dynamics, including rich bottom end.

A hardwood, so denser than most and a more direct tonality as a result. The mid voice tends to be more pronounced with a rounded quality to picked notes. So it’s a different option to spruce - more direct with cleaner definition between the spectrums of treble, mid and bass.

Brazilian rosewood is now so protected under environmental laws you’re unlikely to encounter it and you’re more likely to come across the Indian, Madagascan or cocobolo varieties. They tend to be tonally warmer in the mid-range than mahoganies with more sizzle in the trebles.

Heavy figuring can look particularly stunning, while tonally Maple tends to have a brighter, punchier character that is found to be less warm in the mids than rosewood or mahogany and with solid bass. Potentially, this wood is an absolute delight for strummers.

The trade-off is reduced dynamics and compression when played hard.

Found on the original Weissenborn lapsteels of the 20s and 30s, and on special-edition contemporary acoustics, this native Hawaiian wood is somewhere between mahogany and maple but is more of a visual feast.

Laminated wood can still share the tonal characteristics of the solid variety. The two and three-piece kind are preferable, while modern high-pressure laminates (HPLs) are sustainable and environmentally friendly.