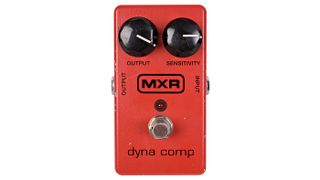 Released in 1972, the MXR Dyna Comp quickly became a hit due to its competitive price and ease of use. Producing dynamic range compression, smoothing out the volume difference between notes, it was widely cloned and adapted.

A success on its release, and a classic by the time MXR was bought out by Dunlop in 1984, the Dyna Comp is nevertheless probably one of the least ‘sexy’ vintage pedals. Designed by Keith Barr and Richard Neatrou, the pair wanted to deliver a pedal form-factor voltage-controlled amplifier (VCA) that worked well on guitar, basing the design around an operational trans-conductance amplifier, or OTA.

After a period of experimentation, the original Dyna Comp was born. The finished unit still didn’t have a particularly great signal-to-noise ratio, but in the context of the time, it was more than adequate.

In addition to its core task of dynamic range compression, the Dyna Comp added a great deal of colour to the signal. This, plus the ‘fattening’ effect of the dynamic levelling led to its popularity among country players, who often favoured Telecasters with thinner-sounding single coils. The compressor’s fixed attack speed leveled off sharp plucking, or percussive pick sounds, while the OTA added sustain and brought the guitar forward in mixes, or live, by allowing for additional gain.

There’s been a lot written about the ‘mojo’ of the originals, and besides two obvious additions - an indicator LED and true-bypass switching - the main difference between units centres around just three things.

First, the IC used; originally a tin-can CA3080 IC, on some models it switched to a DIP-style chip; second, the type of transistor used at the input; third, the move to multi-layer PCB and SMD manufacture. Whatever the technical details, though, the real magic comes from the players, and the Dyna Comp has seen action with artists as diverse as David Gilmour, Sonny Landreth and Adrian Belew over the years, appearing on countless other boards and records.

The output control on the Dyna Comp is a level control, simply attenuating the signal just before the output jack. Due to the OTA amplifi er that makes up the core of the circuit having a variable gain, the output allows the player to tame this amplifi ed signal.

Of course, there’s a certain amount of crossover with the sensitivity control, in that compression level is controlled there. Bringing up the sensitivity will result in ‘squash’ as the sine wave top and bottom of the signal are attenuated or boosted, respectively.

Typically, a studio compressor will have controls for some combination of threshold, ratio, attack and release, whereas on the Dyna Comp the compression is completely controlled via the sensitivity, or threshold knob. This is because the attack of the unit is pre-set, the threshold is a factor in working out the compression ratio.

Compression in the case of the Dyna Comp is about setting a top threshold, or attenuation level, and a bottom threshold, or boost level. A heavily-compressed signal will have a less dynamic range. The goal is to smooth out the signal so that the overall average level can be brought up. On the Dyna Comp, this gain is not directly accessed by a dedicated control, but is a function of the variable gain OTA amplifier.

As the name suggests, this is a miniature version of the original design and the Dyna Comp Mini brings to the party a two-position Attack toggle switch to allow for greater tweaking of the pedal’s compression. It might seem like a small addition, but it’s a surprisingly large increase in the overall flexibility of the unit, allowing for sharper, more aggressive tones with that trademark rich, compressor sustain.

Another diminutive offering, the SP is a descendant in the ROSS brand family tree, albeit with a radically diff erent control layout. On the front panel, there’s a three-way toggle for compression sensitivity, as well as an output knob, as found on the Dyna Comp. The main addition is a clean blend control; when paired with internal DIP switches for a high-cut filter, input pad, attack and release; it’s the most feature-rich mini compressor on the market.

This is a nearly verbatim clone of the famed ROSS Compressor. The Dyna Comp and ROSS have almost exactly the same circuit but with diff erent tonal characteristics. The Keeley 4-knob expands on its more simple sibling with clip and attack controls. Particularly in the case of the latter: a dedicated knob is a huge step up in terms of fl exibility and utility, plus extra sustain without killing pick attack.

Get the tone #1: clean picking

The alternative country sound requires sensitivity at minimum and output at maximum, but if you have a nice amp or a drive pedal after the comp, this might just work better in helping you to achieve the right tone. Pick attack is smoothed off , and articulate cleans will cut through a bit more on denser picking lines.

Get the tone #2: wall of sound fuzz

Get a Smashing Pumpkins-style fuzz sound with a Dyna Comp into an Op-amp Big Muff . Sensitivity is set low, just to smooth some attack and peaking levels when strumming. The goal with the output level is to get it to be slightly north of unity volume. We want the compressor for level control and a bit of extra gain, but not excess colouration.

Get the tone #3: punchy delay

Artists like prog rocker Steven Wilson are well-known for running delay and reverb in front of dirty amps for a more intense, washed-out sound. Another way to increase the potency of your delay lines is to put a compressor before the delay, smoothing out your input signal for a uniform, slightly higher gain on the way in.