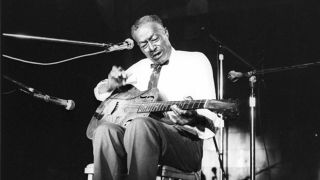 Get to the heart of traditional acoustic blues with this slide tutorial, including five examples in the style of the legendary Son House.

Born in Mississippi in 1902, Son House was an early influence on none other than the great Robert Johnson. He took up slide guitar, aged 25, after hearing a drinking buddy playing one night.

Many slide players use an open tuning to facilitate chord playing and House generally tuned his guitar to open G (low to high: DGDGBD). As a solo musician, there was often no reference point to tune to, so many of the old recordings vary as much as a tone or so in pitch. Our examples, however, are recorded in actual open G - though we’ve ‘aged’ our recordings by reducing the treble to recreate a sound like the resonator guitars House played.

We recorded with a metal slide, so there is a little handling noise. Position your slide directly over the frets (not behind them) for proper intonation. Mute the strings with your idle fingers behind the slide for a clear note. House wore his on his second or third finger, using other fingers to form chords and riffs.

Start with conventional playing for the descending turnaround in bar 1; the slide is brought into play in bar 2 for the quick shift between the C and D chords. Thanks to the open G tuning, this is achieved simply by laying the slide across the strings at the 5th fret and sliding up to the 7th. Easy!

All the slides and the little bit of vibrato in bar 2 are played using the slide. There will likely be some string noise, but this can be minimised by muting behind the slide with a gentle touch from a free finger - many slide players use a high action to assist further. To reach up to the high G, angle your slide so that it only touches the first string.

Again, all the slides and little bluesy bends are achieved exclusively with the slide. This rhythmic approach is not an exact science, so don’t be too concerned with reproducing exactly what is written here. Listen to the audio example on your CD and concentrate more on the getting into the Son House groove.

Another rhythmic example, this time using a single finger placed across the strings to begin with, then bringing the slide in at the end of bar 2 for contrast. You’ll notice this gives a completely different sound - something Son House made frequent use of in his own playing.

This final example uses the slide throughout. Those slides don’t start on a specific fret - that would sound way too regimented. Just experiment with swooping into the chords until you are happy. Note the chromatic movement in bar 2. This is played with the slide, but kept static rather than sliding between each chord.