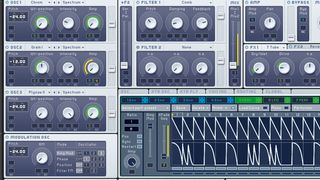 Despite now being decidedly long in the tooth, Native Instruments' legendary Massive synth still sounds every bit as amazing as it did when it first arrived a decade ago.

In this walkthrough, we'll show you how to use Massive to design a highly mobile melodic sound. For more power synth tutorials, get your hands on the May edition of Future Music.

Step 2: All three of Massive’s main wavetable oscillators have been stacked together for complexity: Osc 1 gives sub weight; Osc 2 is a fizzy ‘reverse’ layer for interest; and Osc 3, set to the Polysaw II wavetable, provides the patch’s core ‘chord’ element.

Step 3: To give Osc 2 its distinctive warping effect, we’ve negatively modulated its Amp with 5 Perf; and a simple sine LFO (6 LFO) sweeps its wavetable for even more movement. We’ve also used a looping 16th-note rhythm (via the 7 Perf mod source) to sequence the Noise oscillator’s Amp amount, creating a plucky hi-hat layer.

Step 4: For extra timbral interest, Filter 1 is set to a tuned Comb type. Filter 2 outputs the dry signal, so we can use the filter Mix slider to fade this comb effect in parallel - to blend its effect into the mix, raise the 1 CombMix macro.

Step 6: Finally, by altering various synth settings over the course of an arrangement, our impressive melodic rhythm can be made to evolve and progress - which is why all of eight of Massive’s macros have been assigned to key parameters. Fire up the patch for yourself and get tweaking!