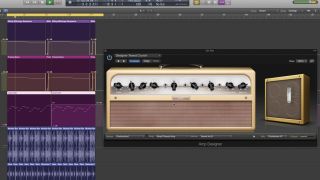 It should come as no surprise that re-amping lead lines is often extremely effective at adding bite, power and drive in your mixes. After all, guitar amps themselves are an integral part of every lead line ever heard. But as we’ll see in the following walkthrough, using either hardware or software amplifiers can prove effective on lead synth lines, too.

We’ve got a lead synth line that's sounding rich, but flat and un-dynamic; it’s certainly not threatening to burst through the mix and take over the track as we might like it to. To rectify this, we’re going to use two treatments; a simulated amp set-up from Logic Pro’s Amp Designer and a more regular distortion treatment from UAD’s Raw. In both cases, the effects are only heard in the second half of the clip, so you can compare them to the original synth lead.

For more on using amp simulations in your productions, pick up the July edition of Future Music.

Step 1: We’re starting with a five-part track. We have two drum loops, a biting midrange synth sequence and a pulsing bassline. To these we’re adding a lead line from Massive. This has a lot of power, but it’s a little high and dry in the mix, and it lacks bite and menace.

Step 2: We set up Logic Pro’s own Amp Designer plugin on an auxiliary. We’re using the modelled Small Tweed Amp, feeding a Tweek 4x10 Cabinet. The 87 Condenser emulation is ‘picking up’ this signal in a central position giving lots of extra driven top-end detail.

Step 3: Next, a washy echo is added to the lead from EchoBoy, while we double the lead’s driven sound with a second auxiliary, this time from UAD’s Raw, which adds weight to the midrange. The effects are introduced in the second halves of the audio examples only.