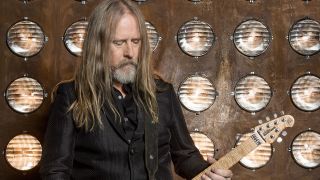 Though well known as grunge pioneers, Alice In Chains are heavily influenced by metal and hard rock, with a sound that sets them apart from the loud-soft cliches of some other early 90s alt-rock acts.

Alice In Chains: "We’re both guitar players at heart; we never intended to be lead singers"

A big feature of Jerry’s playing is dissonant harmony and a fondness for that staple metal scale, the Phrygian mode - take a listen to the main verse riff in Would for an example.

He’s also no slouch when it comes to soloing, and early influences from Eddie Van Halen to Jimi Hendrix shine through in tracks such as Grind, which features speedy legato and lyrical pentatonic lines.

Jerry normally plays his guitars tuned down a semitone to Eb to allow for deeper riffing and more aggressive vibrato, but we’ve recorded our lesson in standard EADGBE tuning for convenience. Try out our riffs and licks to get a little of Jerry’s magic.

There’s a great mix of some of Jerry’s favourite chords here - F#7add11 and E5dim will help you capture some essential AIC harmonies. Alice In Chains employ odd time in tracks such as Them Bones; count an eighth note pulse to keep time with the unusual feel of our 3/4 and 4/4 time change.

Somebody Check My Bends

This riff features Jerry’s penchant for headache-inducing Sabbath-influenced string bends that sound like there’s no pitch centre - listen to Check My Brain for a typical example. It takes control to execute these kinds of bends without overcooking them, so make sure to support the strings with any free fingers.

Soloing, In A Nutshell

Jerry’s solos often fuse elements of traditional blues phrasing with fiery hard rock attitude, resulting in a mix of Gilmour-esque melodies and fast legato that sounds truly epic in slower tracks such as Nutshell. Aim for a wide vibrato here, and dial in a wash of reverb and delay, ensuring that any idle strings are muted by your pick hand.