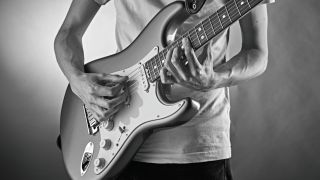 Get rocking with the easiest altered tuning of them all, using our guide to drop D basics for electric guitar...

“Drop D tuning, then. What’s that all about?”

Well, unless you’ve just taken your first guitar out of its box for the first time, you’re probably used to tuning your instrument. Hopefully you’ll know the names of the strings too: E, A, D, G, B and E from the lowest-pitched string going up to the highest.

“Yeah, I know how to tune up. So drop D is something to do with the D string, right?” Actually no, but it does involve a D note. The idea is that the sixth string, the lowest note on the guitar, remember, is down-tuned from an E to a D. It’s also known as a drop tuning. Hey presto, you get the name ‘drop D tuning’. Simple!

“That makes sense. Why bother though? What’s the use?”

First, drop D enables you to play a couple of handy chord shapes. They’re easy to play and great fun too – the boxout on the right explains all. Second, in drop D you’ll be lowering the pitch of your guitar’s sixth string. This is great for hard rock and heavy metal styles where you need a weightier sound.

Yes, loads of songs are in drop D - it’s a well-used tuning. To name but a few... Led Zeppelin’s Moby Dick, Nirvana’s Heart-Shaped Box, Everlong by Foo Fighters, Stockholm Syndrome by Muse, Pantera’s Walk, and, on a lighter note, Dear Prudence by The Beatles are all great examples.

“Shall we play some music, then?”

Sure! Take a look at the first tab example below. The two chords in bar 1 are examples of the powerchord and sus2 shape we looked at before. You’ll be playing those two chords before switching to a single note riff to round things off.

There’s an open string which gives you a brief moment to move before the 5th fret note. Just make sure your fretting hand is moving as you play the open string. Also, you could end the Csus2 chord with a slide down the strings to get you into place even quicker.

“Great. I’ll practise that. What’s next?”

Nice and D’sy does it

This easy to play, hard- rocking powerchord shape can be fretted with just one finger and easily moved around the fretboard to any pitch you like. Soundgarden’s Outshined is a classic example from their Badmotorfinger album.

The ‘sus’ in Csus2 is short 10 for suspended. Dial in a distorted tone and this chord sounds epic in a post-grunge Foo Fighters-meets-Alter Bridge way. This shape (played two frets lower) rounds off the intro lines in Shinedown's Fly From The Inside from their 2003 debut.

Fret the D5 chord using only your first finger. This makes it easy to move down to the 10th fret and add your third finger on 12th fret for the Csus2.

Use the same fingers as before for D5, C5 and Csus2, then notice how the sus2 shape is used again in bar 2. You’re just moving the two shapes around the neck.