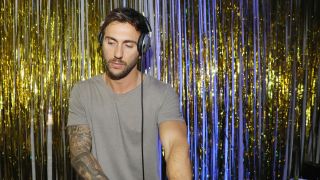 (Image credit: Alexander Tamargo/Getty Images for ME by Melia)

Hot Since 82's house productions exemplify the current trend for minimalism and unfolding progression throughout the course of a track, with an emphasis on steady, rolling rhythms as opposed to obvious drops and switch-ups.

None of his individual drum sounds are particularly impressive on their own, but they all serve a specific purpose within the groove, combining to make a composite beat that chugs along and drives the track, while leaving space for dubby chords and repetitive melodics.

Step 1: Here’s our initial beat comprising drum machine one-shots. A 4/4 kick provides the solid rhythmic backbone, a classy-sounding clap fires on beats 2 and 4, then an offbeat open hi-hat is slotted between the kick notes. At this stage, there’s no real ‘groove’ going – let’s address that next…

Step 2: Throwing in the occasional ghost snare and closed hi-hat on even 16th notes throughout the beat injects a sense of ‘push-pull’ into proceedings. When programming hits like these, their placement and volume will have a huge impact on the resulting groove.

Step 3: At this point, the groove sounds a little ‘naked’ and bare. In this scenario, a good way to pad out a house or techno beat is by working a dense, high-pass-filtered drum loop into the background. If the loop is too rhythmically complex, chop it up and repeat sparser sections. 4/4 pumping can also help slot the loop into the mix.

Step 4: Now the main parts are down, let’s throw down some ancillary sounds – the occasional reverb-swamped tom, 16th-note rimshot bursts and other hits – to embellish the beat. Another common house/techno trope involves the use of eighth- or 16th-note clap bursts as mini ‘fills’ throughout the groove.

Step 5: Next, we copy and paste out the parts to extend the loop. Engaging a high-pass filter on the track’s kick at the end of eight- and 16 bars is used to interrupt the pounding flow. A 16th-note 909 snare roll, faded up in volume with automation, intensifies things even more.

Step 6: Now the beat is complete, we throw in musical elements: a groovy one-bar bass riff, a dubby chord stab, synth swells and repeating vocal FX. Pay particular attention to the interaction between the drums and other sounds – everything must serve the bigger picture and work as a collective whole.