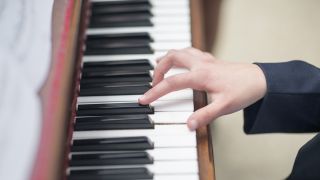 Ask a hundred big-shot songwriters how they come up with their musical hooks, and you’ll get a hundred different answers. But when it comes to writing a solid, catchy earworm, two things remain consistent: first, often you just have to get lucky; and second, you’ll know it when you hear it – as will your audience.

Generating memorable hooks can be a challenge for even the most experienced tunesmith, and vast amounts of time have been spent in pursuit of the ultimate hook. The challenge is to find something that’s completely unique while at the same time fitting into the familiar musical landscape; memorable enough to be recalled, but not so infectious that it becomes annoying. So let’s run through a few initial considerations that will help get your priorities straight.

When trying to come up with a dynamite hook, simpler is often better. Memorable motifs tend to be the ones that most people find easiest to remember – the sort of thing you only have to hear once to be able to sing it back. That’s the reason we use the word 'hook': it’s meant to lock instantly into your brain and lodge there.

From Beethoven to Beyoncé, the rule of simplicity holds true. Overstep your audience’s comprehension and you’ve blown it. So what about the musical content of your ear candy?

There are two main schools of thought when it comes to ‘composing’ a hook. Some writers prefer to come up with a melodic hook first, then fit an appropriate set of chords underneath, while others prefer to start out with a chord progression and come up with something that fits over the top. None of these are better – as with most aspects of composition and production, it’s mostly a matter of personal taste and experimenting to find the method that works best for you.

If music theory isn’t your strong suit, it’s probably easier to start with an existing set of chords and sketch out your line instinctively. This approach also has the benefit of allowing you to use MIDI plugins and processors to lock incoming MIDI data to a scale or key that you know will work with the chords, giving you the freedom to just plonk away randomly and come up with a good starting point.

So now that we have a workflow in mind, we want to reconsider the hookmeister’s mantra: ‘simplicity is key’. But what does that actually mean in practical terms? Well, at its simplest, even though it might seem like a bit of an uncool approach at first, sometimes the more childish and nursery-rhymesque your motif is, the better. So following that logic, the simplest type of hook is the monotone chant, that just sticks on one note and hammers it home with a catchy rhythm. Let’s take a look at how you might go about it.

Ground up: a one-note hook

Rhythm and syncopation are as important as the notes that form this type of hook, but we’ll get deeper into rhythm later on. For our first consideration, which note do you actually pick?

The most obvious choice would be the root note or tonic of the key you’re in, but the most obvious isn’t always what works best. For instance, check out the chorus hook in the recent Little Mix single Shout Out To My Ex as an example…

It’s in the key of F major, but the hook is centred around the fifth (the note C). By going for the fifth rather than the root, it’s given the whole chorus a particular feeling – there’s tension, caused by the need to resolve back to the root, which would be absent if the hook were based on F in the first place.

You can get great results by picking a note that’s somehow at odds with the track – a flattened seventh for example. If the tune is in the key of C major, you could try a repeated Bb note as your hook.

As you add more notes to your hook, it makes sense to stay within the boundaries of the parent scale of the key you’re in – in other words, the set of notes that define the key of the song. The more notes you add, the more complex your hook will become, together with the added risk of it becoming less memorable, so finding the happy medium is your overall goal.

For more inspiration and ideas to craft the perfect hook, get your print or digital copy of Computer Music issue 240, with 21 video guides to help you turn a good tune into a great one.