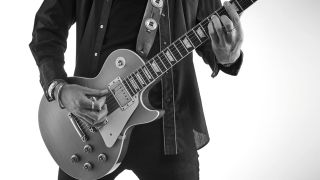 Hone your timing, dexterity and picking, and learn a few new chords too with our quick rhythm guitar workout.

Seeing as about 95 percent of most guitar songs is spent playing rhythm, improving this aspect of your technique is somewhat essential. As well as learning more chords, general technique plays a major part and each of this month’s riffs presents its own challenges.

If you struggle with any particular riff or technique, try to break it down into its simplest elements. For example, if the alternate picking and chord changes in Example 2 are tough, try picking just one open string note instead of four; or, alternatively, ditch the chords while you focus on picking. And, of course, practising slowly always helps!

We’ve taken our inspiration for this lesson from Brian May, Randy Rhoads, Mike Einziger and Scott Henderson, covering a variety of genres from all four corners of rock, but the ideas have been used by hundreds of players and needn’t be limited to any style or genre. As always, experimentation is the name of the game!

This is a great example of being more creative with three simple chords (A, D and G) - we’re using slash chords and arpeggios for a ‘Keith Richards meets Brian May’ style riff, before jumping up the fretboard for some higher register sus4 chords. Compare our riff to basic open chords and you’ll see just how effective this approach is.

The trick in this classic 80s metal-style riff is developing a fluid grouping of four pick strokes between the two-note chords (aka diads) without any string noise. This is a really easy idea to develop along the length of the fretboard - just keep the open string going and experiment with new diads as you move. Try the open fourth and sixth strings too.

This is a great riff for developing your coordination (accurately synchronising your picking and fretting hands together). Although the riff is in the slightly unusual 6/4 time signature, strumming with a constant 16th-note motion will keep your pick hand in time. Listen out for the downpicked chords (Bsus2 and F#5) to stay in time.

Although inspired by Scott Henderson’s jazz fusion-style, these chords could also work in an ambient post-rock setting. In order to nail this riff aim for simultaneous movements of your fret-hand fingers (rather than a one-finger-at-a-time approach). This takes patience but you’ll benefit in the long run as you develop quicker, smoother chord changes.